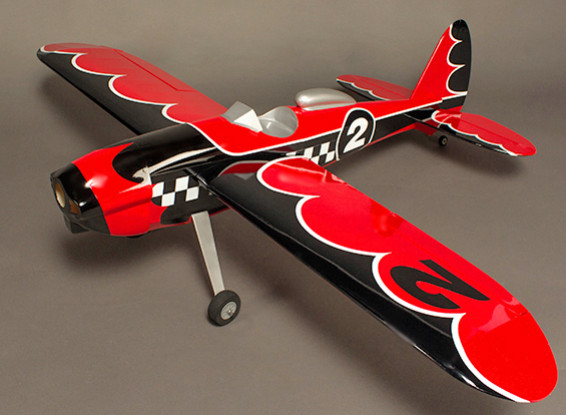 You will earn 112 bonus points for buying this item.

The Golden era of aviation - The grand finale at the 1929 Cleveland Air Races, when Pilot Doug Davis beat the Army and Navy in his sleek little Travel Air Mystery Ship monoplane. This crushing defeat of the military domination of air racing was a defining moment in aviation history. It caused the military to get rid of their World War I concepts of Aerial warfare and to start ordering state-of-the-art aircraft. More than 500,000 tickets were sold for the 1929 races, which took place over a ten-day period. That was the zenith of air racing as a spectator sport. The Great Depression, combined with the decreasing novelty value of flight, cut into attendance figures during the 1930s. Nevertheless, the National Air Races continued through 1939. They were held in Cleveland every year except 1933 and 1936.

Our Vintage Monoplane racer captures the essence of aviations "Golden Era" with the looks of a 1930's racer and the handling of a far more modern aircraft. She is beautifully constructed from quality Balsa and Lite Ply, being an ARF airframe the covering is pre applied for you and looks stunning!

The wings are a simple plug in affair with a carbon fibre spar and a thumb screw retention system.The power system is your choice of 30-35 sized brushless outrunner, 60-80 amp speed controller and either a 3s or 4s 2500-3000mah Lipoly battery.

Nice plane. The covering is smooth and has no wrinkles. The size to weight ratio is very good. Flew the plane with a Tacon 870Kv 3548 motor with 550W of power. I have a 60A ESC with 13X6 APC prop with Nanotech 4S 2200 battery. Got almost 5 min of flight time. The plane has no bad habits and does not tip stall at all. If floats with no power and lands easily. I bought a second one as a spare, as I have learned from past mistakes, that backordered items sometimes don't come back to stock. I would recommend this plane without hesitation. Money well spent