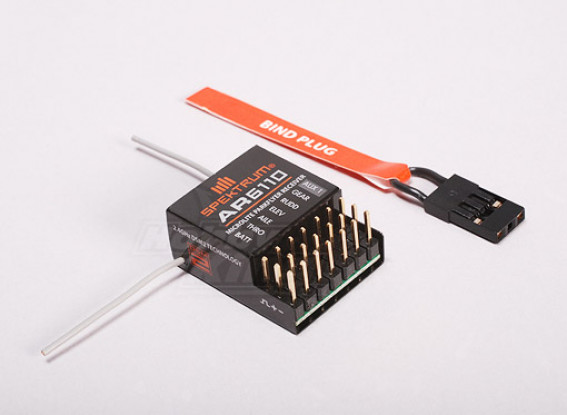 You will earn 39 bonus points for buying this item.

Spektrums 2.4GHz DSM2 technology gets even smaller with the AR6110 6-channel DSM2 Microlite Park Flyer Receiver. The AR6110 weighs less than 3.5 grams making it the lightest 6-channel conventional plug aircraft receiver on the market. Antenna locations give the AR6110 improved signal path diversity. The receiver also features a red LED (labeled with H) that indicates the number of holds that have occurred since the receiver was last powered on. The AR6110 is compatible with all aircraft DSM2 radios and module systems. It is designed for park flyer use only.

I have purchased 4 of these recievers for planes up to 5 kg. No issue with reliability at all and they handle all that is thrown at them. great for Heli also.

As soon as HK get thiem back in I will be buying another 4.

Nice and light parkflyer reciver. I use them in my micro gliders and parkflyers. I have 5 and no problems with them. will buy more

Receiver as befits the spectrum sensational.

flown this in my home built depron f15 with 2200kva 1800 turnigy at 120-130 kph. covers a lot of ground fast so possitive control is essentail and this rx provides it with confidence out to approx 300m out and 400m vertical.i recommend

quality and nice looking of spektrum. no more words to describe it. very little rx

good and possibility for using for real using.

good for this price