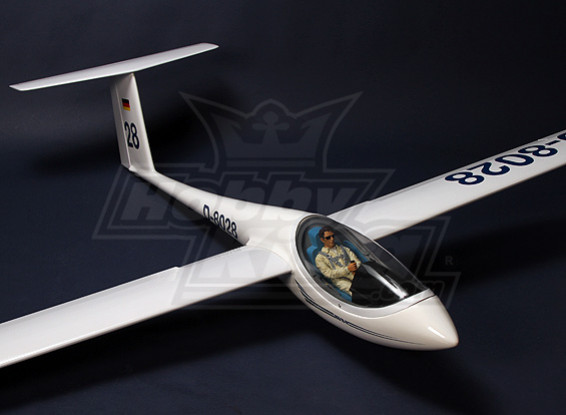 You will earn 79 bonus points for buying this item.

The AS28-18 is a German built 18m wingspan single seater performance glider designed around the superb handling characteristics of the original AS28 (15m wing span). Our AS28-18 Kit has taken scale gliding to a new level featuring a fiberglass fuselage and built up ply/balsa wing construction with a carbon fiber wing tube and easy sprung retention system for the wings which will make setup a snap next time you're ready to take to the skies.

The amazing attention to detail is evident in the large highly detailed pilot and cockpit featuring instrument panels and a detailed control levers and buttons.

With large working flaps this model can be flown and landed in relatively small areas, plus, the model can be setup in a traditional flap/aileron configuration or a Quadro-flap configuration for extra control and breaking effect.

You will need 5 slim wing servos, 2 for each wing and one for the elevator while the rudder can be operated with a standard servo. You will also require a transmitter and receiver (Tx/Rx) and battery.

For the price it's a good value. Be aware of several issues. The largest issue is that wings have zero dihedral! None, flat as a board. The prototype had dihedral. I do not expect this model to fly well and the lack of dihedral cannot be modified without a lot of work, i.e. new wings.

As others have noted, one winglet is twisted and slants inward too much. Don't use a heat gun as suggested, way too much heat. Instead use some very hot water.

Also the fin is not perpendicular to the wings, again some warm water and gently twisting of the boom will fix this. Then reinforce the tailboom/fin area with some FG to resist cracking.

beautiful ARF unfortunately Hobby Kings quality control is lacking.
The tail boom is cracked along the top and broken on the left and right side
of the cracked section. I have contacted customer service, hopefully they will make it right.

Guys I am having serious problems about weight. Today I had a great wind and could not get a lift on a perfect slope. Some days ago I tryed on a very strong wind and also it dived. I am using a lot of lead weight to get it balanced, and there is no weight to get off from back. Any solutions? I am posting a video now. Besides the weight problem, it is a superb model, very beautiful, great even for static but I will fly or crash it flying. Regards.

Received this model today. All looks OK so far but same as a lot of complaints on HK China reviews for this model, no instructions in box. I think it is manufactured by FlyFly hobbies in China. PDF instructions available here:-
http://www.flyflyhobby.com/downloadsfront.do?method=picker&flag=all&id=c043e8de-51af-4d82-97f3-aeaa532424c8&fileId=22033dc4-2214-45d4-9057-c1c24fa3f59d&isDownloadPermissions=none
Copy and paste in to your browser.
All fus items and harware pack seems the same but no flaps.
Everything else looks the same, wing span, length, wing loading, Wing area, weight.
The other thing I have noticed is the fibreglass to the underside seems very thin and I would recommend reinforcing as will take some stick when belly landing.
Will add more as I build if I find any thing else that may be helpful.
Andy.

I received my ASW last week and am very impressed. Beautiful finish, all straight...I have been in the hobby for 40 years and I know that there is no possible way to build something like this for that little money.

I read other comments about poor alignment, no instructions bad hardware, etc etc...But personally i found none of this. (except the hardware which I will replace anyway).

The asw is by no means a beginners airplane. Experience is required. i can not comment on the flying yet since I have been installing servos and will report as I progress.


Again it is awesome value for 100 bucks.

I know QC for some HK stuff is pretty bad but this is a nice example of a beautiful Fiberglass plane. Just as described. Arrived double boxed from USA warehouse. There is slight warp in the mold of the main body. The vertical stabilzer is a few degrees off 90. Hopefully this won't effect flight characterstics.
The finish is excellent and it arrived with what appears like all parts in tact. Controlled surfaces are pre hinged aside from the rudder. Everything looks to be of good quailty.
It's probably going to be a winter project so I put it together just to see what it looked like and now have it hanging on the wall in my living room. Beautiful!

Hey did anyone get a manual? Where is the correct cg location? I figure the wing spar but people are picky. Does thd servo go in the tail or fwd section? Help a fellow flyer out here. ;)