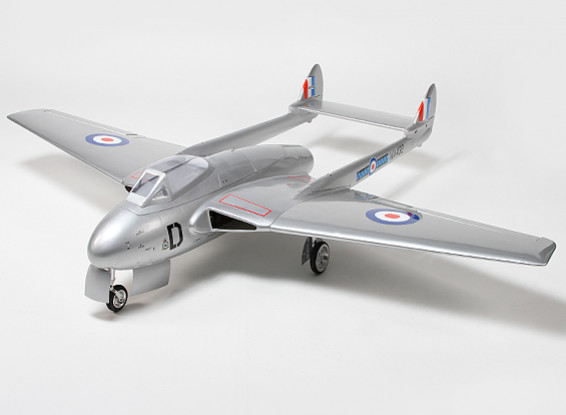 You will earn 556 bonus points for buying this item.

The de Havilland DH.100 Vampire was a British jet fighter commissioned by the Royal Air Force during the Second World War. Following the Gloster Meteor, it was the second jet fighter to enter service with the RAF. Although it arrived too late to see combat during the war, the Vampire served with front line RAF squadrons until 1953 and continued in use as a trainer until 1966, although generally the RAF relegated the Vampire to advanced training roles in the mid-1950s and the type was generally out of RAF service by the end of the decade. The Vampire also served with many air forces worldwide, setting aviation firsts and records.

Almost 3,300 Vampires were built, a quarter of them under license in other countries. The Vampire design was also developed into the de Havilland Venom fighter-bomber as well as naval Sea Vampire variants.

Our DH Vampire is designed around a Dr. Mad Thrust aluminum 90mm 12-blade EDF unit and 1550kv motor for use with a 6S 22.2V lipoly battery. It is perfect for a pilot looking for something different. The all metal tricycle landing gear gives superb ground handling and is extremely rugged. Spring loaded gear legs absorb less than perfect landings. The airframe of the Vampire is molded fiberglass composite for the fuselage/tailbooms with the wings and horizontal tail being of built up balsa and plywood. All wooden surfaces come pre-covered in plastic film.

Since this is a plug and fly model, all you need to do is complete the final assembly, set up your radio and fly. An evening of work is all that is needed to get the Vampire ready for its first sortie. We've included premium electronics, including a 100A high voltage ESC, and metal gear servos on all control surfaces. No need to upgrade any electronics here, we've done it for you already.