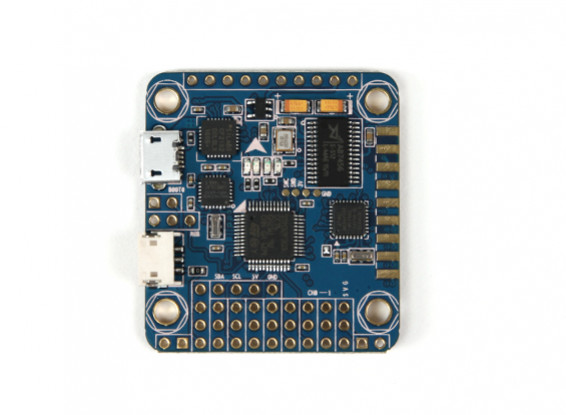 Now you can have a lightweight F3 Flight Controller with built-in OSD and Blackbox. The FLIP32 F3 AIO-Lite does it all on the one board.

Compared to the F1 MCU, it now supports more UART, runs faster and has a Blackbox data logger to help with fine tuning your setup to get the best performance from all components. The OSD gives lots of helpful information straight to the display.

The FLIP32 F3 has 16 times more flash memory (128kb Flash) than most other flight controllers and a floating point coprocessor for ultra fast loop times running the LUXFLOAT PID controller.

Using a PDB with an onboard current sensor allows the OSD to show voltage and current on the heads up display. Both Cleanflight and the OSD can be connected to via the onboard USB. A jumper is used to select which module the USB is being connected to.

The board is slightly longer than normal (at 40mm) but still fits onto the usual 30.5x30.5mm mounting holes and comes in at an unbelievable 7g.

How to set osd with cleanflight? Tutorial

This is an old version, newer are F7. Poor documentation not describing how to connect. Only 3 UART´s limits number of external sensors.

Many bad comments, due to people not understanding the board.
See here: http://nathan.vertile.com/blog/2016/04/11/airbot-flip32-f3-aio-lite-and-typhoon-4-in-1-esc/
What you have to do to talk to the board / flash it is:
solder pins on the large solder tabs
Connect jumpers as listed. i.e. a horizontal jumper top and bottom all the way to the left to connect the CP210x with UART1 (leftmost 2 pins - marked STM32 Rx+TX).
Power with bootloader pins connected. Remove the bootloader connection.
Select No reboot sequence + manual baud rate 256000 in iNav/BetaFlight/CleanFlight configurator.
Load SPRacingF3 firmware, and flash.
To flash OSD, move jumpers one pin right, connecting Mega328/Max to CP210x.
And finally to fly, move jumpers one place further right, connecting UART2 to the Mega328/Max.
Set UART2 to MSP.
Connect Rx to UART3, and GPS to UART1 (2 left pins)
Board supports external current monitor, and VBat monitoring. Must be powered by external source (PDB / Old school ESC).
The single row is pins for motors. If you want to use in plane, you have to break up the servo connectors. You can borrow 5V from the PWM receiver side rail. If you have soem dupon cable it is easy to move connector from the 3way servo connector to a 3way with 2 wires and a lose wire.
Plan is to use it using iNav. Having many motor outputs is GREAT

i had to flash the firmware to SPRACINGF3 from cleanflight 2.2 to get it to connect.

Board could not be flashed or connected in beta flight or cleanflight.

Board would not connect to boot loader. Tried BetaFlight and CleanFlight could not be flashed or connected.

Boot loader Not Responding in Beta Flight with my brand new board. I eventually managed to load the firmware but after cycling the power it stays locked in boot loader mode and that is without any jumper on the boot pins. It wont reload cleanflight and it is not even good for anything now.. Just once I would have liked to give a good review on something from HK. I had High hopes with this one, it had a nicely made board not as cheap and nasty as some, the finish looked good, pins are easy to solder because they are spaced apart well. I liked that it said betaflight compatible but then when you try to flash it the board wont flash without using another program.