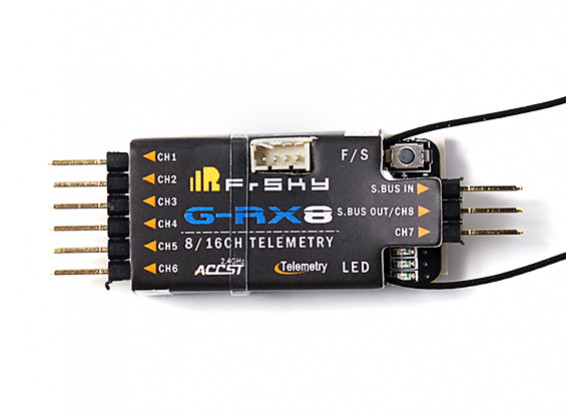 The FrSKY RX8R 2.4GHz ACCST 8/16ch Telemetry receiver can work with most aircraft, however it is designed for optimal use with a Glider. FrSky built the variometer sensor into the RX8R receiver, this will give you telemetry data such as altitude and vertical speed.

The G-RX8 supports the redundancy function as well, this means you can add another receiver to create a back-up in case one fails. In addition, it supports SBUS and PWM mode, allowing you to switch between the 2 channels very easily.

Good price, very reliable. It's the second one I use. In both I use the SBus output to connect to a flight controller without any problem.

great range, accurate Vario and hight, AN2 port can be used to battery voltage, for me the best glider RX

When I unpacked this vario reiceiver I was really surprised: so small, nevertheless 8 servo connectors an integrated vario!
Perfect for even smaller gliders, e. g. DLG's.

Excellent addition to any RC glider

Having struggled with disparate telemetry sensors and Rxs in the past, this product is an ideal all-in-one.
I initially did have some difficulty with binding until..... I read the instructions and remembered I had the EU version.
Highly recommended and super value

this is my standard receiver: 8 channels, no range problems encountered, good integrated vario and with the analog port easy to get battery voltage telemetry

Works fully as expected. The included pressure sensor (altitude) is high precision. The only remark is that in order to use Ch7 and further you need to change the standard configuration. This is easy to do but you need to be aware.

Bought the wrong spec (EU) and currently trying to change the firmware to non EU...buyers beware, I an very new to the hobby in my defence.