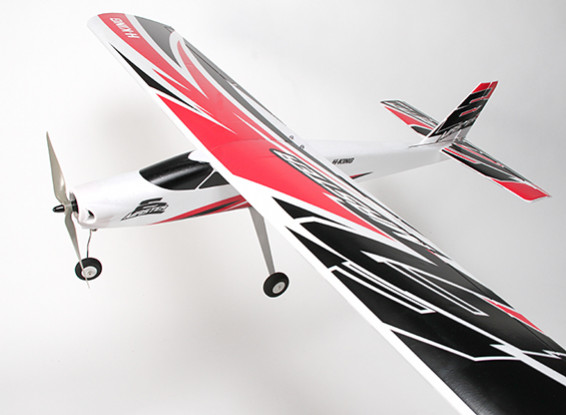 You will earn 61 bonus points for buying this item.

Just another high wing trainer? We think not. The new HobbyKing™ EZ Master and Mini EZ Master are trainers at first glance, but once you fly them you'll see they're everything; trainer, sport plane, aerobat. Moulded of tough EPO foam, a bright graphical colour scheme makes them look good in the air, and durable when they inevitably hit the ground. Both the EZ Master and Mini EZ Master airframes feature tricycle undercarriage with a steerable nose wheel, bolt on wing, and full 4 channel control, including dual aileron servos for great roll response! Open the box and you are greeted with a low parts count, and minimal assembly. Go from the workbench to the flying field in less time than it takes to charge the batteries!

Take-offs are short and sweet due to the powerful brushless outrunner motor, with landings a breeze due to the light wing loading of both models. We have had a blast flying these planes during all of our testing and video shoots. They're stable when you want to relax, but push the throttle forward and slam the sticks into the corners and she wakes up. Inverted flight requires some down elevator due to the flat bottom airfoil, though the mild dihedral angle makes rolls as axial as one would expect from a high wing trainer. Kick in a little rudder at the top of hard climb outs and do crisp stall turns back to the downline.

Both the EZ Master and its little brother, the Mini EZ Master are available in two versions, Plug and Fly (PNF) and Almost Ready to Fly w/ Motor (ARF)

a very nice......piece of ch...... !
a real pain to install the front steering due to the drilling to clamp the wheel axle
and then i flew it about 20 seconds, made a flip, and the plastic stuff where you put the wing it went off due to lack of glue or bad glue i don't know, with the following result:

even my expensive upgrade emax 2215/20 motor is bent

I've just started putting mine together and have found some point's of interest, the main wing spar is only 30cm long and 6mm wide, the recess in each wing is 30cm, so they put a ridge in the centre of the 30cm spar to stop it sliding into either wing to far and causing the wing to fold, I would recommend adding your own spar at 60cm long, the wings themselves look very tough at least 3cm thick till near the wing tip, ..............The front wheel holder is a brass insert into plastic which connects to the push rod, I recommend removing the brass insert and CA gluing it back in, (very fiddly) the plastic moulding around the brass insert securing screw is less than half a mm! at 2 points around the securing screw, mine came apart just tightening up the securing screw, easy fix,... Oh and the kit came with 2 propellers even though the description says they are required, In general this looks like a tough plane, the landing gear looks good, all over I reckon it's a good trainer/slow flyer, I will report back after I have flown it, looks like a good purchase to me!