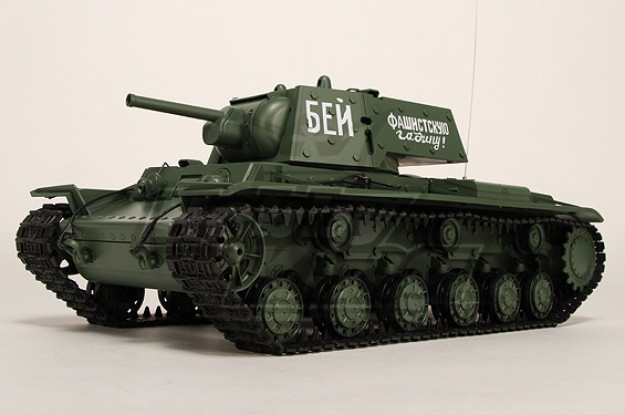 You will earn 68 bonus points for buying this item.

Russian KV-1 is a Russian tank produced at around 1942.
The Kliment Voroshilov (KV) tanks were a series of Soviet heavy tanks, named after the Soviet defense commissar and politician Kliment Voroshilov. The KV series were known for their extremely heavy armour protection during the early war. Almost completely immune to the guns mounted on the early Panzer III and Panzer IV tanks. Prior to the invasion, about 500 of the over 22,000 tanks in Soviet service at the time were of the KV-1 type.

The tanks turret rotates 360 degrees, and the barrel can move 60 degrees. The tracks run on spring wheels just like the real tank to enable the KV-1 to clear obstacles easily.

There are many sound and feature adjustments and the radio can control all functions without the need for multiple buttons. This helps the user to quickly control the tank in battle situations.

Included with the KV-1 is a 7.2v NiCd pack, charger, radio system and all accessories.
You only need 8 AA batteries to be battle ready!

I purchased this tank about three years ago, it came to about $150 with tax and shipping at my door (in Canada). I was impressed by the articulation of the bogeys and the detail was okay as well. The charger is garbage, but I had my own charger that I use anyways. This tank holds up amazingly, with no real change in performance after three years. This tank can compete with $400-$500 Tamiya tanks no problem. Well worth the money. If you get the tank, buy a lipo battery and some new connectors. Get a lens to cover the LED, it looks super goofy if you don't. Don't flood the smoke system with fluid, it takes very little. Don't drive in sand or dust unless you clean the gears afterward. All in all, an amazing tank that doesn't disappoint. Can't recommend strongly enough.

Hi, I purchased this item for my grandson three battery charges later will no longer work, Not worth the money, VERY disappointed with this product , don't reckon the others would be any better.

Arrived in one piece - well packed in a reasonable time frame.

All good but I find the steering a bit hard to handle, this thing is not proportional (mine isn't) and it is a bit hard making smooth turns. The tank is fast and manoeuvres well outdoors on the dirt.

Stock battery gives you 15-30 minutes depending on terrain and how many times you fire etc. I did an immediate LiPo 2450mA 2S upgrade (lo-voltage buzzer essential) and now it runs for hours, with breaks for motor to cool.

All spare parts and metal upgrades are easily available online.
When detailed for historic authenticity, a very cool tank.

Awesome staff for the prize it comes.
Don t overcharge the smoke machine it will not work
Just be patient for shiping
Could be more metal parts

I bought this for my 9 year old, but in hope to play a bit myself. When I got it I tried it directly and drove around and it worked awesome, even the smoke worked although I hadnt prefilled it. But when I tried to shoot from the barrel it didnt work, the sound was correct but no BB exited the gun. I took a flashlight and looked into the gun and saw that the BB had gotten stuck in the rubber seal at the start of the gun. I disassembled the whole tank and finally got it out. I found out eventially that the screws that hold the plastic part holding the big barrel was tightened to much! When I loosened the screws it worked perfectly.

I also removed the mechanism that makes the tank move when shooting the big gun just because it looks wierd when shooting from the side.

The stickers, mainly the big one are really hard to mount because of the plastic parts sticking out.

Exept for these thing the tank is an awesome buy and me and my kid will have a lot of fun with it (probably do some metal upgrades in the future.)

I am very disappointed with the items I ordered , Tank KV1, after the try gun can not shoot and can not move up and down. LED is not lit, the tank can only forward, reverse, turn left and right ...... how the service? do not try in the store before they are sent?

The only negative - in the directory could not find a spare battery at the tank - will have something to himself to come up with!