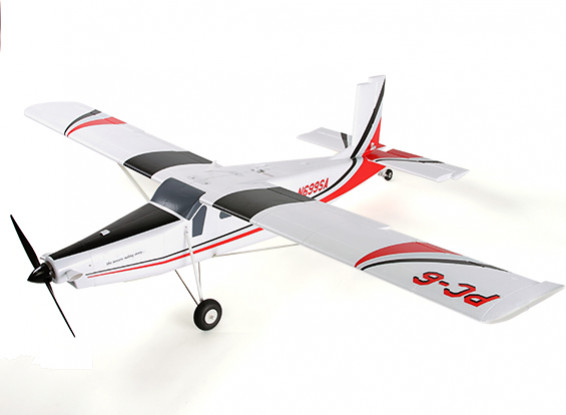 You will earn 196 bonus points for buying this item.

The PC-6 Turbo Porter is noted for its Short Take-off and Landing (STOL) performance on almost any type of terrain, capable of taking off within a distance of 640 feet and landing within a distance of 427 feet while carrying a payload of 2,646 lbs. Thanks to its STOL performance, the PC-6 holds the world record for highest landing by a fixed-wing aircraft, at 18,865 feet (5,750 m), on the Dhaulagiri glacier in Nepal.

Due to these characteristics, they are frequently used to access short grass mountaintop airstrips in the highlands of Papua Province (Indonesia) and Papua New Guinea. The Porter was also manufactured under license in the United States during the early 1970s for operations during the Vietnam War. It received the designation AU-23A Peacemaker for service with the U.S. Air Force and UV-20 Chiricahua for service with the U.S. Army.

Our PC-6 a fully molded airframe made of rugged EPO foam. Arriving as a plug and fly model, the PC-6 can be prepared for flight in about an hour of work. It requires no glue to construct as it is all bolt or screw together design. The pre-installed 4212 700kv motor provides ample power for scale short take-offs and glider towing duty all on the very common 4S 14.8V 3000mAh lipo. Accessing that lipo is very easy through a hatch on the bottom of the airplane. No need to pull the wing off just to change packs. Though a sport scale model, the PC-6 features scale wing struts and its very recognizable wide set landing gear.

Flying the PC-6 is great; with its large wing it will float around nicely at slower speeds, but apply full throttle and jam the sticks in the corners and she comes alive. Takeoffs and landings are a breeze thanks to the steerable tail wheel and wide set main gear. Lower the flaps to really slow down for smooth, precise landings. Other great features are working LED lights, a glider release mechanism, and even a dropper door in the fuselage bottom for releasing candy, parachute men, or whatever!

This classic scale STOL model is available now. A small amount of work is all that is needed to make this classic ready to go!

Great value and good quality model. A bit underpowered with the stock setup. Plastic landing struts should not be screwed in at wheels or you will definitely break them. Recommended CG is perfect with a 3000mAH 4s. You should not need any ballast. The little foam piece everyone wonders about is meant to hold the battery in place as you slide it into the fuse. The manual is pretty clear about this. Fantastic flyer and looks very scale. Will do the slow dives at altitude like the full-scale aircraft with full flaps deployed.

Very happy with plane and Hobby King so far.

Ordered this plane on a Friday night and had it in my hands the following Friday....can't beat that for fast delivery. Had a problem with the ESC which HobbyKing rectified without any problems. Easy to put together, this is my first RC plane and I did not have any problems assembling this model. Had its maiden flight today by a mate of mine with 30+ yrs of experience who did the trimming and when he handed the controls to me it flew perfectly. Very pleased with this purchase, thanks HobbyKing.

Great plane glad to have it in my hanger from New Zealand.

Always loved the PC 6 from my time in the Army. Mine arrived yesterday, unboxed and fully assembled that night and ready for its maiden flight today. A word on the unboxing and assembly. Not all the screws as detailed in the instructions were there. Not a big deal if you have screws from previous planes on hand. The rest of the assembly was very straight forward. I set everything as per the instructions including the CG. I used a 3300 4s Dualsky battery and had to add 2 ounces to the tail to balance the plane. Maiden including an additional 3 flights all went very well. Take offs and Landings were no problems at all on our grass strip. No hidden vices here. This ones a keeper for sure.

admittedly i got the plane on the black friday deal for 118 shipped which was a great value on this plane. this was my first art tech plane and it came packaged nicely. fit and finish was spot on, it went together easily in about an hour. had the maiden today and it flies perfectly, drop the flaps full down and it slows to a crawl. I took it up about 200 feet, cut power and put on full flaps, full elevator, and it glided nicely all the way down. no tip stall. it felt a little underpowered so i'm not sure about the towing option but it had enough to fly around very nice and scale. the only thing i plan on changing are the main wheels which are ok but i think a little bigger air filled tires will soak up landing bumps better and give a little more clearance for grass runways.

This is great model. It is one of the best i have purchased, great packaging, fly great and lots of fun things, dropping candy to towing a glider. It is very stable and easy to put together. With the Black Friday sale it is a steal, don't miss this one. As you can tell I love the plane

First to write a review on the Pilatus Porter.....LOL
I am extremely happy with the plane and give it 5 stars , Everything was well packed and assembly / setup was a breeze . I am adding slightly larger Dubro wheels and have upgraded the motor to the NTM 42-30 750kv motor . If you are a Pilatus fan this plane is a must .

Took advantage of $20 off plus the ANZAC day free shipping. Arrived in 4 days. Well packed. The instructions are just a few pictures. The plane goes together fine, but found the plastic supports for the undercarriage too short by about 4mm. I felt if I forced them into the wheel hubs so the screws lined up, there would be too much stress on the mountings. Wing struts fit fine with clips on the wing mounts. Unfortunately this means the struts are left sticking off the fuse. Would have preferred if the strut mounts in the wings hinged so they could line against the wing when stored.
Only other niggles;
I found that to fit my 4S 3300mA packs, I had to do quite a bit of cutting in the nose. At the recommended cg, I had to push the battery back under the wing otherwise it felt too nose heavy.
Tires are very hard. I would recommend fitting softer ones.

Flying wise. The plane flies well and has no vices. With about 20 degrees of flap it gets airborne in 3-4 meters. Full flap landings are great. The model slows down quickly and needs to be flown in.
I would have rated it higher if not for the issues mentioned.

Worst packaging for a plane that I've ever seen from HobbyKing. Usually they do much better. This was honestly pretty bad and I'm surprised it didn't get damaged in transit. All they did was wrap it with brown wrapping tape and a little bit of paper.

Also the elevator servo was DOA, so right off the bat I'm going to have to replace it before I can fly it.

But the quality of the model is pretty good, the foam detailing is fairly crisp and clean. The elevator and rudder surfaces are a bit stiff, but the ailerons and flaps move very cleanly and crisply. Nice mounting for the landing gear. No instructions on how to mount the radio or all the hatches on the plane, but it wasn't too hard to figure out.

Hopefully it will fly as good as it looks.