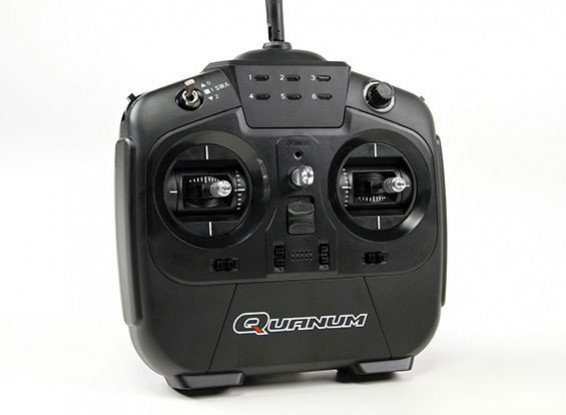 You will earn 35 bonus points for buying this item.

The Quanum i8 8ch 2.4GHZ transmitter has primarily been designed for the popular multi-rotor market and has been mapped and matched to APM and PX4 flight controllers, bringing ease of use and programming to a normally complex product. It can however also be used with helicopters, fixed wing aircraft and gliders.

The Quanum i8 transmitter has 8 channels, the first 4 channels being the 2 dual axis sticks. The 5th channel is a 6 position rotary knob which is perfect for different flight modes on a multi-copter, the position of this switch knob is shown by the 6 LEDs on the front of the transmitter. Channel 6 is a 3 position switch and channels 7 and 8 are slide switches. The stock radio programming is matched to APM and PX4 flight systems in channel mapping, direction, Aux channels and the 6 flight modes via the detent rotary knob for a plug and play solution. The i8 is a fantastic radio for other Multirotor FC systems with map able Aux channels, channel reverse and other custom features. Included with the system is a set of labels for labeling the various flight mode LEDs.

The i8 features AFHDS 2A (Automatic Frequency Hopping Digital System Second Generation) which has been developed and patented by FlySky for all RC models. This system offers superior protection from interference whilst using low power consumption and also utilizes a highly sensitive receiver. FlySky's AFHDS technology is considered to be one of the leading systems on the RC market today. The USB port on the bottom supports charging, software updates and future features using the bi-directional A2 protocol.

The Included i8 receiver outputs simultaneous CPPM and PWM on all 8 channels, letting you connect to advanced flight controllers via PPM and still have PWM for external devices such as retracts or chute bypassing the FC pass through function adding redundancy and reducing programming complexity.