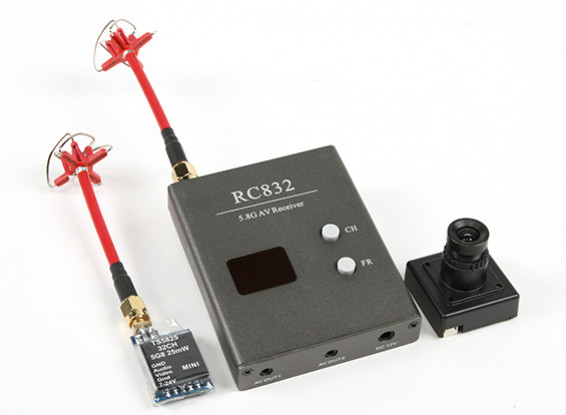 You will earn 44 bonus points for buying this item.

The Skyzone P&P 25mW FPV set was configured from the ground up to be a plug and play system, all cables are pre-manufactured with matching connectors, so no soldering or guesswork is required. The set is so complete even a “Y” power splitter is included for powering the video receiver and a set of goggles or a monitor via a single XT60.

The set includes the TS5825 25mW CE approved transmitter that provides ultra clean 5.8GHz power in a micro sized video/audio TX. Great for pilots looking to reduce size and weight while maintaining great performance. The TS5825 is transmitting a full range of 32 channels weighs in at just 8g.

The FPV set also includes a matched cable set for the included Sony CCD 480TVL camera. For power the cables have JST connectors and a battery balance port power adapter. At the heart of the set is the RC832 Receiver which is the perfect size for easy integration into your ground station or DIY goggles.

The receiver uses the same two button interface, making channel swapping a breeze. There are 2 independent A/V outputs for both audio and video, which enables you to use a monitor and a set of goggles or maybe a DVR to record your flight. The receiver is supplied with 2 power cable options for mini JST or “Y” XT60 for receiver and monitor/goggle power.

To finish the P&P set off a Sony FPV tuned 480TVL CCD camera is included with all matching cables and a set of 5.8GHz Circular polarized antennas for maximum performance. This set will get you FPV flying in no time, and is a perfect match to the Quanum DIY goggles for a budget minded set up!

Receiver not as sensitive as I hoped

Nice sharp picture from the camera once I adjusted the fine focus.