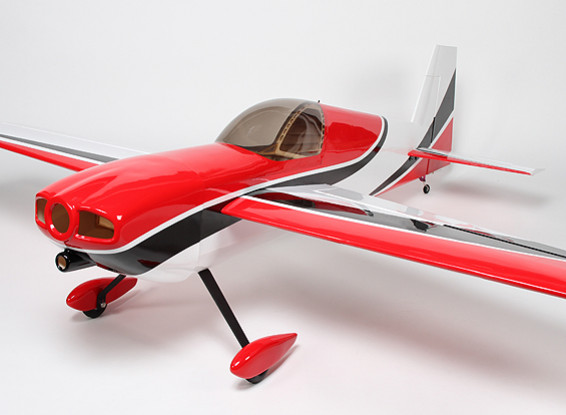 You will earn 198 bonus points for buying this item.

The full scale Slick 540 started life as the Slick 360 with a prototype built based on the Laser and Extra 230. It had the basic layout of the Laser (the same wing profile, elevator and rudder) and the control system of the Extra. The composite wing was stressed to +/- ten “g’s” but retained most of the steel tube construction of the Laser/Extra. The huge success of the plane and subsequent orders made them look for further ways to improve and develop the Slick.

With everything engineers learned on the prototype, the production Slick was designed from the outset to be of all composite construction. This allowed greater internal volume which meant larger pilots who traditionally have had trouble fitting into other aerobatic planes could now fit with ease. Capable of +/- 10g's, an emphasis was placed on eliminating any flutter problems. It was calculated that if flutter was to occur it was over 500 knots, well above the max speed of the airplane. After that, drag reduction was a priority. The all composite tail requires no fly wires, and the landing gear was manufactured with internal brake lines, with composite wheel pants streamlining the rest of the landing gear.

Our Slick 540 faithfully reproduces the clean lines of the full scale. The all built up balsa and plywood airframe comes pre-built and covered in a multi-color scheme that is pleasing to the eye and easy to orient in the air. Just like the full scale we have retained the airfoiled tail surfaces. Rugged aluminum landing gear with pre-painted fiberglass wheel pants and cowl set off the model. The wings, and horizontal tail are two piece plug in units allowing easy transport. A complete hardware package includes wheels, fuel tank, velcro straps, ball links, heavy-duty pushrods, and fiberglass servo arm and control horns. Accessing the electronics, fuel tank, and wing bolts couldn't be easier since the fuselage incorporates a large access hatch.

This is a almost ready to fly model so you just need to complete final assembly, install your servos, engine and other electronics. A few evenings of work is all it should take to finish the slick.

Hobbyking did a terrible job packing mine for shipping and of course it was damaged during transit. The cowl was basically destroyed. I would like a new cowl but I know their warranty that they claim is great is nearly impossible to get so why even attempt it. The plane is overpacked in one box so if it gets even one dent during shipping it will probably arrive damaged.

Mmmm, must have got mine packed on a friday arvo. No instructions, no wheel spatts and a spare right elevator . After searching online i also noticed that this kit doesn,t have the duel horns per surface it only has single. Will see if i can make spares out of carbon sheet or just use Dubro horns.
One thing I,ll say though is the plane is big and the quality seems good.
I,m sure Hobby King will send me replacement wheel spatts ...yeah like that will happen!

I flew My Slick for the first time last Tuesday and I am able to report it flies as well as it looks. No trim was required and I was so confident with the plane that I flew all my usual show off routines, verticals, hovering, rolling circles etc..
I am using an OS33GT and it has ample power for me but I think hot 3D pilots would probably go for the next size up engine.
My all up weight was 6.6Kg. CofG was calculated to be from 160mm to 180mm from root LE. I set mine up at 172mm. Surprisingly I had to add 57g tail weight which I poked down the stab tube
Great stuff HK

Got one of these today cost $400 to northside of Brisbane and it is very well made so far everyting looks good I will know more when I assemble it .It look better and stonger than the more costly brand names that I have . When I assemble this kit I will give more feedback If anyone has a ? about this airplane please ask and hopefully I can help .

Mine arrived today and i am mightily impressed with the quality of the build and value for money.
More to follow when I put it together and fly it.

Here's a link to the video of the 7th flight of my Slick.
Flies lovely with the DLE35 in it...
Falcon 20x8 prop
Danhkal tank
Savox 1256TG servos
awesome bit of kit :)
https://youtu.be/LQP_unLVD-Q

Maidened the slick at the weekend - fitted with a DLE35RA with a Bowman ring installed on the stock 'muffler' swinging a 20*8 falcon wooden prop. Engine performance is top notch. However the plane is just beautiful to fly. Knife edge is as simple as rolling it over and applying the rudder, no need for any elevator, it just track straight an true like that. very little if any coupling.
As it is a new engine I did have a few dead sticks, and had to dump the plane into the crop in the field. This plane is tough! took a few knocks and no damage... lucky, I guess, that I was able to land pretty flat... I did manage to bend the wingtube, but have ordered a new one off ebay for about 9.
The wheel axles are indeed a two piece affair and on the last landing one of these did shear at the bolt face. no biggy.
For the price you can't go wrong with this plane - it is big, so you get a lot of model for your money... some of the hardware is not so good, but again, at this price you can't grumble.
Love it!

This is a aeroplusrc slick 35cc without the carbon, its a large modern design and will fly extremely well. Bargin.

I have two of this plane, one of which was running on gas engine and the other was converted to electric. I have to say this is one of the best 70 inch class planes out ther in terms of quality vs price. A couple of things to note for new owner though. First, the rudder servo tray is a bit too thin, try reinforce the whole section with some carbon fibre. Second, DO NOT , I repeat DO NOT use the stock tail wheel pin, the hole which the rudder rod goes through is way too small, you will definitely jam your rudder at some point. try use a ball link instead. Finally, this has caught me out recently, the landing gear axis is received as one singe component but in fact it was two, the thinner part was actually screwed in the bolt, if you fly gas then sooner or later this bit will come loose. you must take it apart and add some threadlock on it. These are about the only things I can think of. This is a great deal, if you look after thoese aspects aforementioned, you will have a great time!