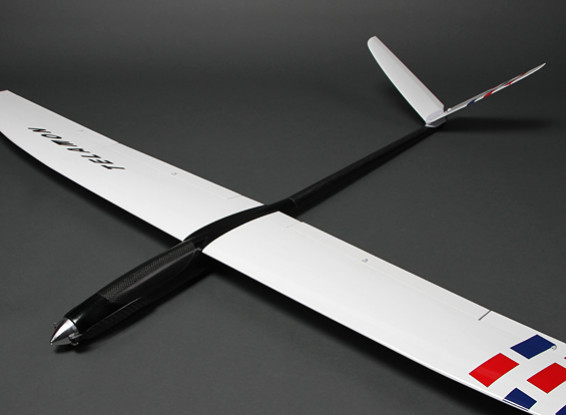 You will earn 346 bonus points for buying this item.

Plug and fly isn't just for foamies anymore. The Telamon electric sailplane is a high performance, high quality airframe with all the electronics pre-installed. Designed to be a competition level sailplane for the discerning pilot with little time to build.

This model oozes performance and quality. The Telamon has a carbon fiber fuselage molded in epoxy resin, not cheap polyesters. The built up wing and tail feathers are made of the highest quality balsa available. Covering those surfaces is premium Oracover plastic film. The wings are two piece plug in type supported by a solid carbon fiber spar joiner. Each wing panel features a MPX style connector that automatically connects flap and aileron servos upon attaching the wings. No fiddly connections to worry about. Pushrods feature ball link ends for maximum precision and zero slop. Even the control horns are airfoiled to further reduce drag. With such a nice model, it was screaming for good components so we have outfitted the Telamon with digital metal gear servos, with the high power brushless motor spinning a carbon fiber folding propeller attached to an aluminum spinner. The blade yoke on the Telamon is a twisted style which is designed to allow the propeller blades to fold flatter against the fuselage reducing drag significantly compared to a traditional straight yoke.

Flying the Telamon is a treat. The slop free control system and rigid construction yields crisp response and on rails flight precision. The low weight, and sleek construction means it climbs to altitude fast and thermals with ease. This a great airplane for those wanting performance, but not wanting to spend a lot of time in the workshop. The Telamon is a great model for ALES competition since it climbs quickly and thermals well.

I also received the model with broken control rod connections which I had to repair before flying.
The glider has a good finish and some nice design features. I particularly like the plug in wings which have all the connections to the ailerons and the flaps which makes it easy and quick to assemble. I did however have problems with the plug in connections which had a very tight fit on the one side which actually jammed and pulled out of the wing on removal. I fixed this by careful trimming of the plug to make it a snug fit.

The glider performs well and climbs rapidly and is pleasure to fly. However the bonding of the v-tail mount to the carbon fiber fuselage failed. Fortunately I picked this up before flying as this would have been disastrous. I fixed this by pop riveting the tail mount to the fuselage.

All in all a beautiful glider but check it over carefully before flying for the first time.

Poor Quality in some details.
1. V-Tail bracket loose. Doesnt fit to fuselage. You have to adjust the mounting holes.
2. Sevo connectors don't fit. You have to pull them out of the wing (cables will break) and glue them in the correct position.
3. Ball joints are broken due to transport impacts.

Summary: A lot of rework has to be done. A nice plane with annoying details.

Not plug and play as said,,

I received my Telemon in excellent condition.
Overall it looks like a well made beautiful glider. After close inspection the VTAIL control rods were broken, not a problem though as a quick trip to a hobby shop to buy some brass horns solved the problem. Next issue was one of the wing plug mounts was about 1mm out so it was difficult to plug the wing in. After a quick sanding that problem was solved. Bar all that I would say it is a great model at a fair price.