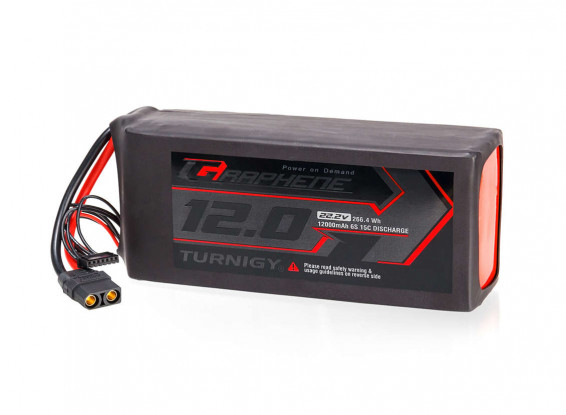 You will earn 139 bonus points for buying this item.

The result is a battery capable of maintaining greater power output whilst remaining much cooler under load. Since heat and resistance are the natural enemy of batteries, Graphene chemistry has significantly reduced these problems and the result is an incredible boost in cycle life and performance.

It's a great battery! Hi drain really quick charge and low battery sag. Really the only negative that I have is to more expensive but you get what you pay for

Great battery!! Low sag :) it performs very well, even in to the normal sag areas... also charges so fast!!!

I bought two of these 12ah 6s Graphene to run in series for 12s 12ah. One battery has already puffed after 3 balance charges on my htrc t240 6s balance charger and the cells are very out of balance after every use. I also notice one of the balance pins seemed burnt. Still works buy it is shorter and discolored. The other one I have is fine and is still rock hard and doesn't have these uneven discharges like my other one. Overall I am very disappointed with one of these packs considering the price. I have lipos from HK from literally 10 years ago and they are still rock hard. I think I got one bad pack out of two I purchased. :(

I bought 2 of these for my e-bike and the runtime is very good. Expensive but good quality. I will buy these again if I need more. Only 20 cycles and no complaints.

You get what you pay for, and you are paying for cutting edge technology. While it is quite expensive, I have had two of these packs which I built a hardcase for, and to this day they still maintain about 12,200 mAh per pack even after 400+ cycles. Extremely impressive. They do not do great when dropped, though. Building a case is highly advised by me. They will also begin to puff when there is no case.

Best battery, no sag, much power!

You get what you paid for!!great quality!

One of 4 ordered will not charge beyond 94%

And ofcourse sending one back will be more hassle than just running with it but it's annoying that they het away with it. (Read and complete the returns/claims form. HKCS .)