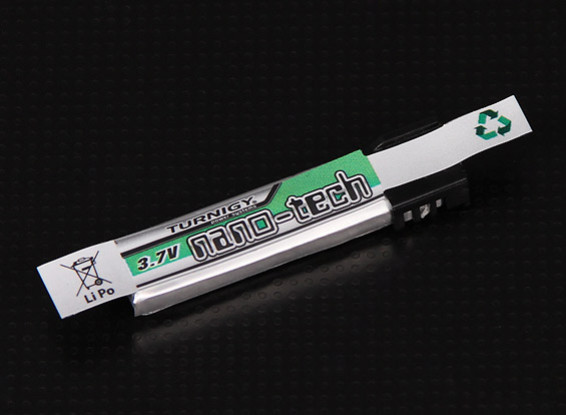 You will earn 1 bonus points for buying this item.

Ordered three of them and two came bad. 1 is at 0 volts the second im trying to fix as it seems that its badly soldered to its plates . and the 3rd works .
Ive had all types of nanotech batteries and have had problems with most. I wont be buying any nanotech batteries anymore.

A tiny little bit tight on nine eagles 260a but a little bit of a wiggle and you ripper works like a champ. Great batt great price well worth it

Despite assurances to the contrary, these packs do not fit into the Nine Eagles Solo 2.4ghz chopper. Do not get these packs for the smaller heli's.

Works great. Fits the Nine Eagles Solo Pro V3. It is longer then stock battery but that is no problem att all. Great power and longer flight time then stock.

i bought 8 so i would not have to wait around to charge them and the wall charger so i do not drain your battery. Give you rc heli/plane to cool down. Do not use them back to back. 10 min breaks are a while

bought 6 of these because the rtf spit i ordered came with a bad lipo..between windy weather and a bad battery have yet to fly my new plane..