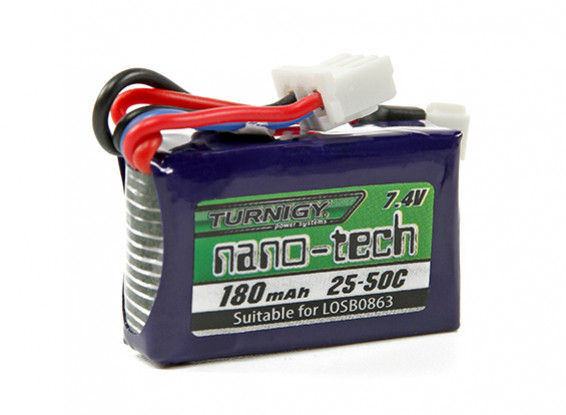 More than just a fancy name. TURNIGY nano-tech LiPoly batteries were designed from the ground up with serious performance in mind. Utilizing an advanced LiCo nano-technology substrate that allows electrons to pass more freely from anode to cathode with less internal impedance. In short; less voltage sag and a higher discharge rates than a similar density lithium polymer (non nano-tech) batteries.

Unfortunately, with other big brands; numbers, ratings and graphs can be fudged. Rest assured, TURNIGY nano-techs are the real deal, delivering unparalleled performance!

This particular battery has a 2-pin Molex connector. Please refer to the attached image as this Battery has the "B" plug polarity. Please make sure this battery suites your connection. The wrong polarity will damage your electronics.

Warning: Does not fit E-flite UMX Beast 3D and similar UMX models which has a three pin connector.

Sure it is good batteries, but does not fit E-flite UMX Beast 3D (has a three pin connector). Should have read the description better.

I replaced the Horizon Hobby connector with a regular servo connector and I use this in the HK Mini DLG with a 5V regulator. It works just as intended. I happened to discharge one of these to 1.2V per cell and it still works after recharging it back up.