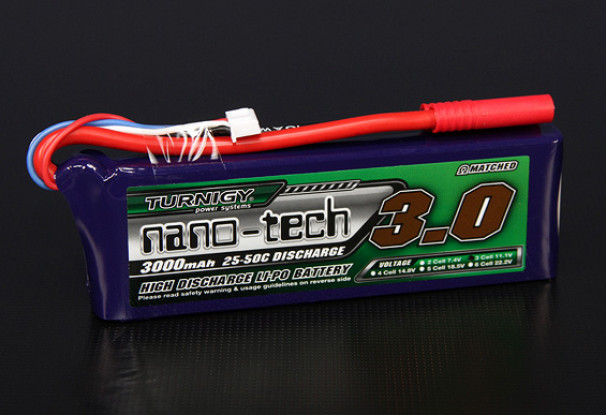 I got one of these for extended flight times on a small tricopter trifecta build, however after a few flights the capacity has dropped by 40%.
I don't think my battery is defective, it performed as expected at first, however it clearly is not a 25C battery, more like 17C.
Watch out if you intend to draw the rated current, the battery won't handle it.

works well on my mini race quad with 4x 12A ESC's I can fly for approximately 8min.
the power is great even tough it's a little heavy for a 250mm race quad - so I ordered another lipo with just 1500mah which hasnt arrived yet.

Surprised of its size and weight. Plenty punching power to keep my Diy H-Quad with LED connected for 9 minutes plus. Here's the proof night flight > http://youtu.be/j6eGJAR7PCE

This is my favorite battery for my Dynam T-28 which is all stock except for a 12x10 APC prop. I can fly up to 16 minutes with the throttle just a bit above 1/2 (6000rmp) and the battery is just starting to get warm by the end, using only 80pcnt cap. of course. If I feel like going fast I can run these batteries 7.5 minutes at full throttle (8000rmp) straight through. Again by the end of the flight the battery is just warm. With my setup I'm pulling 32 amps at full throttle. I love these batteries. IMO the power to weight ratio is excellent. I will buying more nano-techs for my other planes for sure.

Very good batteries, I use them with my quadro.

cheap and reliable transactions only at hobbyking thks ....

Bought 3 of them for my Quadcopter DJI Naza Flamewheel 450. Because of the low weight of these LiPo's. One of the 3 appears to have a bad cell, this makes my quadcopter "fall" from the skies after nearly 4,5 min of flying time (this should be a solid 8 mins). HK does not give warranty because the difference of cell voltage is to low...however I cannot use it at all!
Conclusion: 2 good LiPo's and 1 completely useless :-(
HK: Therefore only 3 crowns

Size is a little different than the "blue" turnigy series.