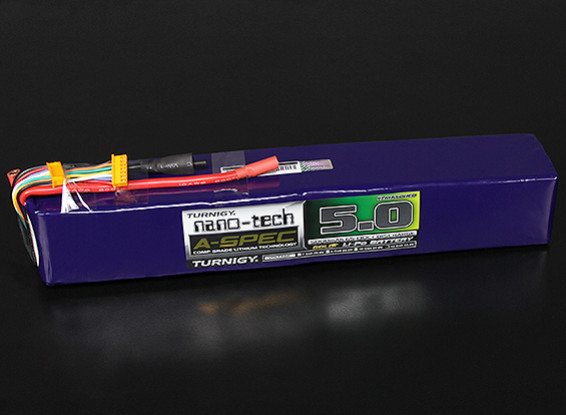 You will earn 216 bonus points for buying this item.

Turnigy nano-tech A-SPEC lithium polymer batteries are built to the absolute highest of standards to provide competition level performance. With features such as gold plated balance leads, silver plated discharge wires and an all new CNT (carbon nano tube) additive mixed into the electrodes, these batteries are simply unmatched by any other in performance and build quality!

The new CNT/electrode mixture reduces impedance, generating less heat and maintaining a higher voltage under discharge load. Basically what this means is that these batteries will provide more power in your machine especially during high current draw maneuvers, and they will provide a longer cycle life due to the lower operating temperatures of the pack.

* The nano-core technology in lithium ion batteries is the application of nanometer conductive additives.
1) The nanometer conductive additives form ultra strong electron-conducting networks in the electrodes which can increase electronic conductivity.
2) These additives create a super strong ability for imbibition in the carrier liquid to supply more ion channels. This improves the ability of ion transmission and ion diffusion.
Through improving electronic conductivity and ion transmission, the impedance is reduced and the polarization of high rate discharge decreases greatly.
Advantages over traditional Lipo batteries.
Power density reaches 7.5 kw/kg.
Less Voltage sag during high rate discharge, giving more power under load.
Internal impedance can reach as low as 1.2mO compared to that of 3mO of a standard Lipoly.
Greater thermal control, pack usually doesn't exceed 60degC
Thickness swelling during heavy load doesn't exceed 5%, compared to 15% of a normal Lipoly during heavy load.
Higher capacity during heavy discharge. More than 90% at 100% C rate.
Fast charge capable, up to 15C on some batteries.
Longer Cycle Life, almost double that of standard lipoly technology.

I have buy one of this for my helicopter Goblin 770 and have recharged it 30 or more times. Always Perfect!!!! No loss of power, never swollen. Best product! For sure I will buy anymore.