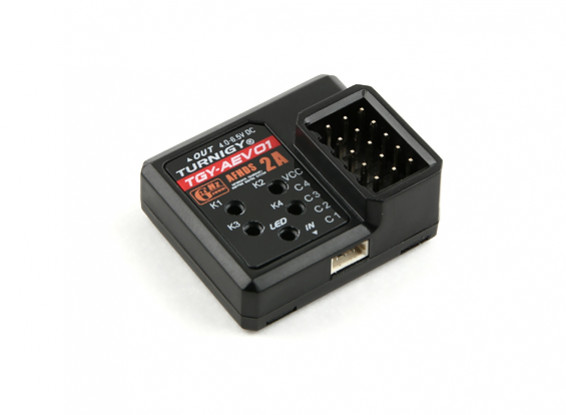 The Turnigy TGV-AEV01 i-bus receiver expander allows giant scale modellers and users of multiple servos on a specific channel to match those servos to a greater degree than ever before. You can connect upto 4 i-bus receiver modules in series, which delivers a further 16 channels.

The TGV-AEV01 is capable of communicating with 4 different expansion channels, or 1 channel for multiple servos. The TGV-AEV01 also allows you to plug in an extra battery pack for direct power for those power hungry digital servos, without the risk of power loss. This option will allow for cleaner reception without high current flowing through your receiver.

Note: The AEV01 is compatible with iA10 and iA6B receivers

These things are about as useless as teats on a boar hog, as my daddy used to say. Unless you have an i10 there is no way to program them. You are stuck, then, with channels 1-4. And unless you have an iA6C receiver you already have those outputs. So what good are these? Useless. They should have been made so you could just push the little switch so many times until it responded to the right channel. You want the first output to be channel 5? Push the switch 4 times. I have two now and unless I find someone in the Dallas area with an i10 I have no way to program them.

This is a FlySky product, so it also works with FlySky branded radios that are compatible with the i-Bus.

legal to use in EU? I guess not. Order is canceled