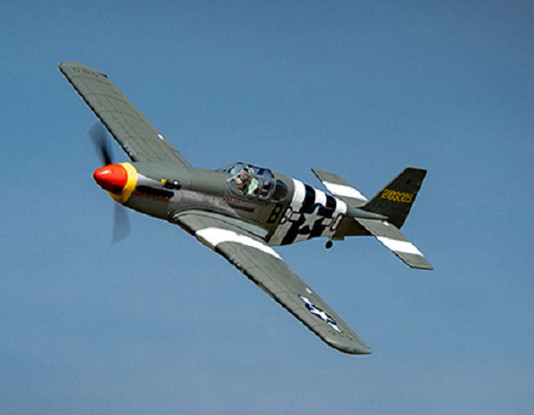 You will earn 205 bonus points for buying this item.

Other features include flaps and a battery hatch to facilitate easy battery pack changes between flight sorties if you are electrifying the Mustang. Please note the photos show a few details that you will need to add on at the building stage. These photos illustrate how a few extra details such as antenna and antenna wire etc can increase the scale appearance of your model.

William Bruce "Bill" Overstreet Jr. (April 10, 1921 – December 29, 2013) was an American fighter pilot and a veteran of the 357th Fighter Group, 363rd Fighter Squadron of the United States Army Air Forces during World War II. He is best known for his solo pursuit of a German Messerschmitt Bf 109G underneath the arches of the Eiffel Tower in 1944

In the spring of 1944, Bill Overstreet and his P-51B Mustang, the "Berlin Express", were near Paris when the action started, immortalized in the artwork by Len Krenzler. Overstreet had followed a Bf109 from the enemy fighter sortie that had attacked the US bomber group he was escorting. After most of the German fighters had broken off the attack, Overstreet and the German had begun a running dogfight, but as they neared Paris the Bf109 pilot had Overstreet on his tail. With the German pilot's desperation undoubtedly growing, he aimed his plane at the Eiffel Tower and in a surprising maneuver, flew beneath it. Undeterred, Overstreet followed right behind him scoring several hits which caused the Bf 109G to crash.

The P-51 Mustang is one of the most iconic US fighters of World War II. The P-51B was an early P-51 Model and could be known as a P-51B or P-51C depending on where the plane was assembled. If you own a P-51D Mustang then add its forerunner to your squadron today! The distinct canopy and razorback will turn heads wherever you fly!

Please note: A set of assembly instructions with step-by-step illustrations are available to download under the "Files" tab above.

Great construction. Anybody with any experience constructing "ARF's" should not have any problems with this airplane.

Well made, very high quality. Have not done maiden yet.

Some defects on Model

Great model , well built; but.. , there are some issues . Weak Oracover , weak Landing gear , and last issue I had , was the wheel ring broke in peaces ( looks like the plastic was old ... very old ) . Again the model flies awesome and stable . Have overall

The model arrived well packaged with no damage at all. Nice details, easy construction, just take a little time with it and it will turn out well. Looking forward to the maiden flight.

I have flown for the first time, if flies very well.
Very nice build quality!
The retract pins are super soft, I can easily bend them with my fingers, the model tracks very poorly on take off. I had a bit of a cross wind and it likes to weather-vane and ground-loop, big time! It lands fine but trying to take off smoothly and steady was a real task, she spins fast and hard! When it does the retract pins bent! I will try and change the tow-in, the retracts aim forward already.
Apart from that, she is beautiful, well worth the money!

Great for the money.

Bought this for my retirement, 10 years away I know, but heyho.
All appears good as I have inspected the contents and cycled the retract, you never know.
I have also set aside a full house of servo`s and an engine with this.
I will report back in 11 years. :)