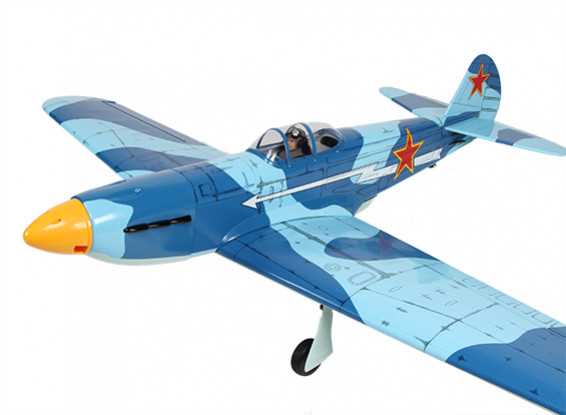 You will earn 260 bonus points for buying this item.

The Yakovlev Yak-9 was a single-engine fighter aircraft used by the Soviet Union in World War II. A development of the Yak-7 with the same armament, it arrived to service in late 1942. Its lighter airframe gave the new fighter a flexibility that previous models had lacked. Pilots who flew the Yak regarded its performance as comparable to or better than that of the Messerschmitt Bf 109G and Focke-Wulf Fw 190A-3/A-4. The Yak-9 was the most mass-produced Soviet fighter of all time. It remained in production from 1942 to 1948, with 16,769 built.

First seeing combat during the Battle of Stalingrad, the Yak-9 operated with a wide variety of armament for use in anti-tank, light bomber and long-range escort role. At low altitude in which it operated predominately, the Yak-9 was faster and more maneuverable than its main foe, the BF-109, but was far less well-armed.

After the Battle of Smolensk, in the second half of 1943, the famed Free French Normandie-Niémen unit became a Groupe and was equipped with the Yak-9. The four flights were named for the towns of Rouen, Le Havre, Cherbourg and Caen.

Our Yak-9 model comes almost ready to fly with just final assembly and equipment installation required. Modeled after the Free French Normandie-Niémen unit "Cherbourg" in the scheme of famed ace Marcel Lefevre, this model is sure to attract attention at the field. The all balsa airframe is strong enough to take a nitro engine, yet is light enough for electric conversion. The forward fuselage has a magnetically secured hatch in it just for accessing things like your batteries or fuel tank. Rugged fixed tail dragger landing gear is great for rougher grass fields, though designed such that a set of retracts will drop right in. This model comes with a very complete hardware pack including pushrods, control horns, fuel tank, engine mount, and even a plastic spinner.

Flying the Yak is much like any other warbird. Hold a little up elevator on the ground, then slowly relax it as you apply power and the tail starts to come up for a nice gentle take off. Rolls are just off axial as you would expect from a warbird. Bring it in low and fast, as it was meant to be. The printed graphics make the model pop in the air and on the ground. If you're looking for a warbird, but a change from all the Mustangs and Corsairs, the Yak-9 is sure to tick all the right boxes.

Overall, a very nice model and looks brilliant. Two issues though, the fibreglass cowl is a bad fit and the control surface hinges all failed a moderate pull test. Check these carefully!!

I put an NGH 9cc on it. Nice assembly. Rear wheel to improve. Rotate freely after first fly. I opened the side cowl for better airflow. Flies nicely and land easily.
With my gasser AUW is 3.6Kg. Too much for it. Verticals are very limited. I think better with nitro or electric for real aerobatics. I fly it "scale". Build is on the good side. I crushed 1/4 wing against a pole (new unknown area !) and i rebuild easily the part missing. When i do a quick small loop, she flip also. I don't kwow why. Do i touch the rudder ? if so it seems very touchy. Very pleased with this plane even if it's not for a beginner. Cheap, flyable and nice look. What else ?

A really nice warbird for very little money. The battery tray is very weak, but the rest of the build is sturdy and light. The finish and covering job is top notch. Don't hesitate to pick one up.

I can't tell you what good value for money this plane is the build quality is great the plane flies as if on rails. I have this plane and the KI 61 Tony built by the same people and is also great value for money. Both planes could do with flaps to slow them down a bit on landing but that is the only criticism I have.

May I just say WOW. Such as nice looking and fun build. You get everything you need to complete this build (for an ARF build). No re tracks but if you spend a little more, the plane comes ready to fit. Good work again.

Going back to my Yak 9 review. Had several flights. I`m using a OS 46 AX for power. Goes like stink. Flights are very stable. The electric retracts need some attention.
The set screw is very small, be careful not to strip the head. I ended up using JB weld to hold them in place.
For take of you need lots of elevator till the tail comes up and then hold it steady till you have enough speed for take off. Other wise the plane will nose in. For the landing, when the plane rolls just about to a stand still use lots of elevator again or you nose in again.
So if you can put maximum elevator throw on your plane. Over all I`m happy with the performance of the Yak, even flew a knife edge.

Got the plane within one week. Assembly went well, except for the tail wheel.
The horn was binding. I cut the horn smaller and solved the problem. The cowl does not fit properly over the nose and the measurement from the fire wall to the prop line is incorrect. Measure 3 times and fit it 4 times to make sure the clearance to the spinner is correct.
Next is the test flight which I will post later.

I just received this plane and the quality and fit is very nice! Sort of expected the graphics pattern to be off or misaligned but the fit is great and the covering seems of good quality. will add more after total assembly. Got a .75 four stroke to power.