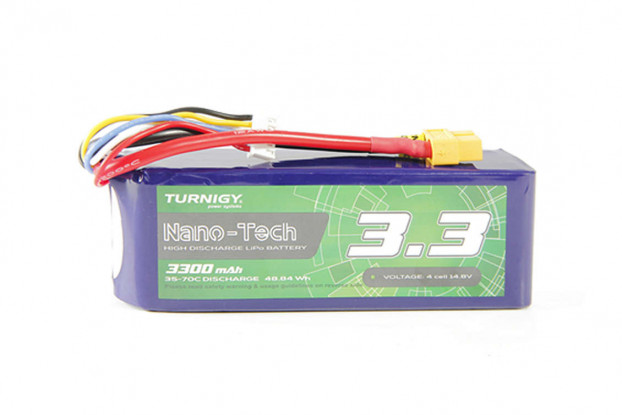 More than just a fancy name the TURNIGY Nano-Tech LiPo batteries were designed from the ground up with serious performance in mind. Utilizing an advanced LiCo nano-technology substrate that allows electrons to pass more freely from anode to cathode with less internal impedance. In short; less voltage sag and a higher discharge rate than a similar density lithium polymer (non nano-tech) battery.

So Far, So Good

This 4s LiPo was perfect for my T.H. Ryan STA. Lead length was fine for this model. It's only gone through 10 or so charge/discharge cycles, but I'm getting full charge and no puffiness. I always keep a storage charge on it, so I expect this battery to last a long time.

Nicely Packed, good power, fits nice in area intended for as for shipping its great, FedEx is better them USPS.

I have good experiences with Nano Tach and Carbon batteries. Although carbon should be better, I think the Nao Tach series gives you good value for your money.

Good stuff for normal customers. Not the lightest one and I have no longtime experience with this brand.

I was happy I already have same exact lipo . I just needed a 2ed .one . My airplane

I was tired looking for lipos and hobbyking have lipos I need and the priceses I can afford . Thank you hobbyking

This lipo battery is rather thin compared with its capacity, is rather lightweight and has low internal resistance (about 4 mOhm per cell).
Powerful energy source!

Actual dimensions 27,5x43x135 and weight 335g. Measured capacity after 3 cycles durig discharge 3297mAh. During consumtption to 60A no heating and small voltage drop.