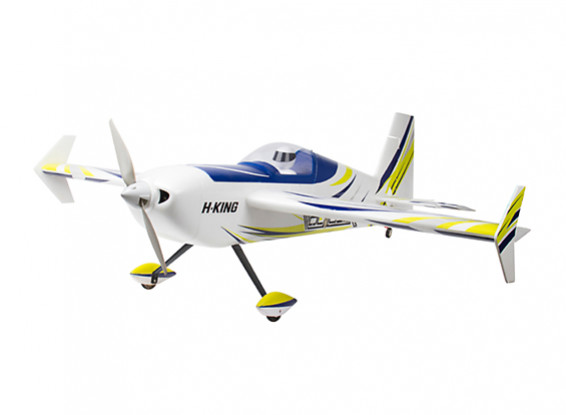 You will earn 167 bonus points for buying this item. 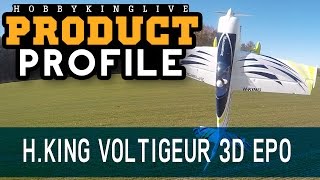 This is a mild flyer on 3 cells, but a entirely different beast on 4 cells! I was not really able to do the 3 D fly you see in the video until I went to 4 cells. If you you experience a motor vibration with the 4 cell just remove the spinner as it’s not really made for the increased RPMs. Other than that, it a beautiful plane, flys fantastic and at a price point you can’t beat!

Excellent plane after a little bit of tweaking

I had previously left an unfavorable review on this plane due to an incident I had with it last year. I spoke with HobbyKing customer support and they were amazing to deal with. This is an updated review based on a second Voltigeur that I ordered this year.
**Disclaimer** Do not try to run the stock motor and ESC on 4S. I've had 2 of these planes and both ESCs burned out QUICKLY on 4S. If you plan to use the stock equipment, stick to 3S - it will still do most of the 3D maneuvers.
I opted to put my own motor/ESC in this plane to ensure I could use 4S....holy cow, the extra power wakes this plane up tremendously. I highly recommend doing this if you want to get maximum performance.
When I first got this plane, I hated it. The flight characteristics did not meet my expectations. However, I quickly realized that it was me and not the plane. I was trying to fly this like a foamie and that is NOT the way to do it. Treat it like a balsa plane and it is AWESOME. If you slow it down, it is very stable and fun to cruise around. Hit the top end of the throttle and it will whip around like no plane I've ever flown. Another great thing, it can take a beating. I’ve crashed this several times and was shocked how little was broken. Just bring foam-tac with you and you’ll likely be able to do field repairs after most crashes. The main weakness is the carbon fiber landing gear. I broke mine on a landing that didn’t seem that rough, got a new one, and broke that one within a week. I opted to make my own aluminum landing gear and that has worked out great. If you're landing on grass, ditching the wheel pants is a must.
This airframe will do pretty much any 3D maneuver you throw at it and will also do some of the XA stuff. Just a quick list of moves I was able to master with this: harriers (inverted and rolling), hover/prop hang, knife edge (best knife edges I've done, it locks in like it's on rails), flat spins, elevators, waterfalls, rolling loops, knife edge flips, crankshafts, and suicides. The plane has excellent characteristics in high alpha maneuvers, just be sure to keep a sharp angle of attack or you'll get some nasty wing rock. One thing that amazes me is how hard you can flip this plane around and everything stays solid. I've come in at full speed, yanked it straight up, put full rudder in, immediately swapped to full down elevator, and blasted the throttle as it violently whips around in the sky. Most of my balsa planes would have snapped in a few pieces, this thing handles it with zero problems.
This plane does great in windy flying. I've taken it up in 15mph winds and it was a blast (very hard to land, but it was fun in the sky). You will get pushed around like any other lightweight plane would, but it can zip through the wind easily on 4S.
Overall, I went from hating this plane to it being one of my favorites. Every time I go to the RC airfield, this plane goes with me. I would highly recommend this for anyone looking to practice 3D tricks before attempting them on a more expensive, fragile plane.
Just a few tips on what I had to do for dialing it in. This plane likes the CG just at the neutral point or a hair forward. The stock battery tray would not allow me to get enough weight to the rear for this. I ended up making my own tray by gluing a piece of 1-ply that runs from the battery tray to the wing spar (glued onto the wing spar). If you cut little notches at the wing bolts, you can still remove the wings for transport. With the rudder, it seems less throw can be better for certain maneuvers. I had it going the full deflection and it would do odd stuff for knife edge flips and flat spins (full deflection works great for knife edge flying though). I dialed it back to about 50% deflection and it did a lot better for those maneuvers. I found that the elevator needed more deflection, so I installed a longer servo arm. I would also recommend installing the horizontal stabilizer with a thin bead of thick foam-safe CA glue. I used foam-tac on my first voltigeur and a small crash ripped the stabilizer off (the glue held very tight). With the CA, it seems to just pop loose in a crash which is MUCH easier to fix.

Same plane as the MX2 but not really.

This is my second Voltigeur, and in between I flew the MX2 which is exactly the same plane but with other colors.... But not really .., the weight difference is huge.
- Voltigeur: 1.360 grams including a 4S 1550 mAh 120 C battery.
- MX2: 1.500 grams without a battery!!!
The control horns of the elevator and rudder servov's need to be extended I you want to fly 3D. (and CG 10mm further backwards makes it all easier).
Great 3D plane !!

Had this plane for a month now, and I am happy with the way it flies. I also like the ease at removing the wings to get it in my vehicle for transportating to the field. I did have some minor issues when building it as I had to replace the plywood piece that holds the tailwheel assembly on (bad glue joint) and the prop was way out of balance. Other than that, I was able to glue it together and ready it for flight in a few hours. No issues yet with the motor, esc, or servos. Have about 40 flights on it now and am practicing hovering with it. With the big control surfaces it has, it reacts well even at slow speeds. Running a 3s 2200 mah Turnigy battery in it and it has enough power for my style of flying. No vibration issues with it so far either but I am sure the out of balance prop would do that.

Good plane with some problems.

I had some problems and apparently, some other customers did too, based on some other reviews I've read. When the throttle is advanced beyond about 3/4, there is a massive vibration problem encountered. This is not a prop or spinner issue, as I carefully balanced both.
It does not vibrate with the spinner back plate attached which does not put any load on the motor and will run up to 100% with little or no vibration, but as soon as any load is applied, even on a smaller balanced prop, the vibration occurs. It also makes a noticeable noise. If you try to run it this way it will destroy the plane.
I was using a 3-cell 2200 battery pack and I can't imagine trying to run a 4-cell pack.
I'll eventually get this figured out, as it has to be either tied to the motor, or the small 45 amp speed control.
What a shame, because the plane itself is really a neat design.
Just my opinion!
Al Coomber