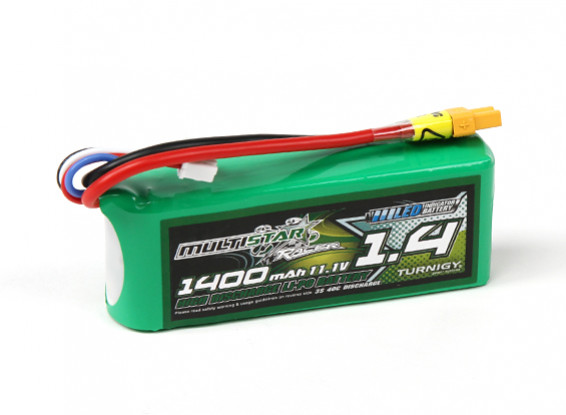 You will earn 10 bonus points for buying this item.

Is your pack fully charged?   Know at a glance with the MultiStar LED series of battery packs!

These race spec MultiStar packs come with an integrated LED charge indicator system which clearly displays the charge condition of the battery.

The number of green lights showing indicate the overall condition of the pack, from fully charged with four green LED lights, down to one green LED light for below 3.6V per cell. An additional red LED warning light is also included which indicate that each cell has dropped below 3.3V.

With all the punch you expect from a MultiStar battery pack, this new feature adds a no fuss system for ensuring you use a fully charged pack in every race.

Fits perfectly in traxxas 1/16 models and works great, the LED for checking charge is super handy, wish more batteries had them

Maybe the best battery i've ever had

I bought and tested 8 of them, great power and lightweight! I'll probably buy more! I confirm they come with a xt30 connector, no problem, just solder an xt60

Product weight is within spec, quality looks great but like Dominik said that it would of been better supplied with xt60's, by spec the battery can deliver 56amps and the xt30's are good enough.

All in all I think ist a very very nice product. The less are great vor a fast check at the field and the lips do very well on my 5inch racer.

But one thing that left a slightly bad taste is that the lips that I got had xt30 instead of xt60 as advertised on them!
So watch out for that.