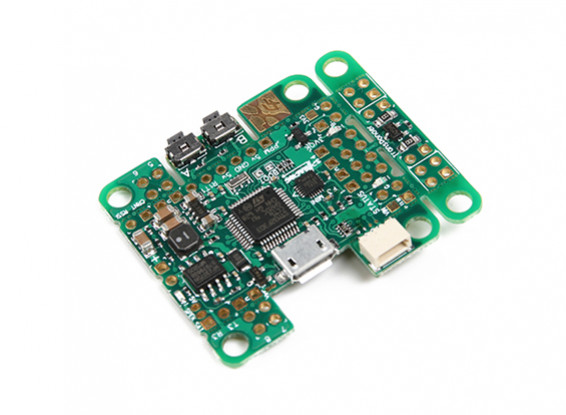 The Seriously Pro Racing F3 Mini V2 Flight Controller (SPRacingF3Mini) was designed to give awesome flight performance in a tiny race-ready package. In addition to the latest sensors, race timing and logging technology and the wealth of other features that make this the board of choice for many, this V2 version has an improved voltage regulator, improved board design and a cool green PCB.

It has jaw-dropping fight performance using its advanced processer, sensor and software technologies to make your aircraft fly like it's on rails. Using Cleanflight software you get the precision flying responses you need for outstanding performance, especially for fast FPV racing!

The SPRacingF3Mini features a race transponder system for recording your lap times. Each board comes with a special transponder code to identify you at race events. Compatible with i-LAP receiver systems. Two LEDs for clockwise and anti-clockwise race tracks.

The SPRacingF3Mini has an ARM Cortex-M4 72Mhz CPU with Math co-processor (FPU) for efficient flight calculations that gets more done in less time. Loop times up to ~2x as fast as previous-generation STM32F1 based boards. It also has a full-set of sensors (Accelerometer, Gyroscope, Compass and Barometer) making each SPRacingF3Mini capable of GPS Navigation as well as sonar support for precision low altitude hold.

The SPRacingF3Mini is also the first and only mini board that features a MicroSD card socket for logging. Supports MicroSD/SDHC up to 32GB!
It is also the only full-featured mini-size board with USB socket which is not shared with serial ports. No more hassle configuring or flashing and the SPRacingF3Mini runs Cleanflight, which can be configured to suit your needs using a cross-platform GUI (Windows/OSX/Linux).

This is a truly amazing miniature flight controller that will set new standards in flight control systems for multirotors, quad racing and fixed wing aircraft.

Stable and efficient flight controller at an incredible low price, just the job