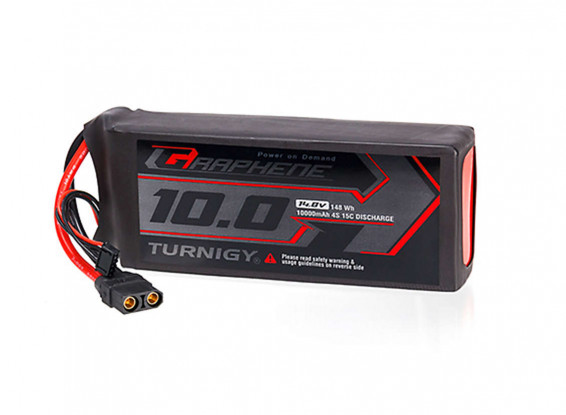 TURNIGY, the name synonymous with performance, reliability, and innovation is excited to release a powerful new battery chemistry in the Turnigy Graphene!

The result is a battery capable of maintaining greater power output whilst remaining much cooler under load. Since heat and resistance are the natural enemies of batteries, Graphene chemistry has significantly reduced these problems and the result is an incredible boost in cycle life and performance.

Battery was a dud, returned it

The battery showed only 3 cells out of 4 only my battery meter...though hobby king service was great, accepted return within 30 days, no fuss, thanks.

The first battery I bought from the stock in Europe for *6 euro or so. The seccond was out of stock and it had to come from Hong Kon. Added transport cost around 22 euro. A bit high I thougt but ok I needed the battery. Now ... I got an invoice from Fedex for 38 euro customduties. Which is totaly outrageous. Overal I paid 60 Euro's in addition on a battery of 86. I am serously dissapointed.

More capacity than stated, does better than batteries that are higher rated

Hi,
I use these batteries on HEX f550+naza+gimbal+frsky telemetry No problems. Flight time 20-25 mins. 15 mins hovering close to water.

It's a bit heavier than the specs say, mine weighs 1000 grams. Didn't put in many flight yet, but so far it's holding up very well. Got it for 70 euros, great price for this pack.