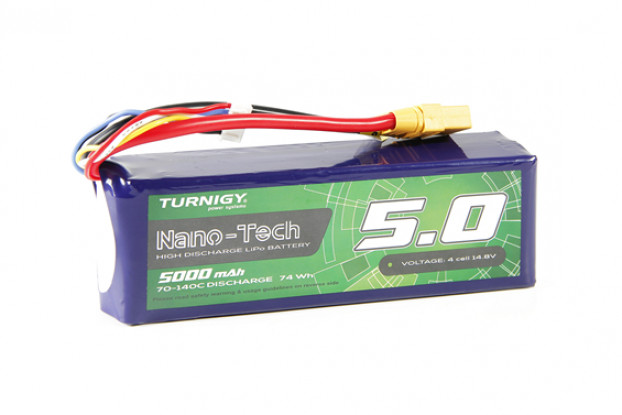 You will earn 41 bonus points for buying this item.

Turnigy Nano-Tech have always been a leader of the pack. Now they are even better with the Nano-Tech Plus series of batteries. The Plus series have been designed for those that want acute discharge from their batteries for even greater performance and extra punch.

The application of nanometer conductive additives forms ultrastrong electron-conducting networks in the electrodes which can increase electronic conductivity. This nano-core technology is the soul of the Nano-Tech Plus lithium ion batteries.

Best for the price

after a year of use and abuse...

it holds up very well. ISR of 4mOhms per cell (+-0.2mOhms) didnt change at all (im going into low power mode at 3.3V on my esc and turn off at 3.2V.)
very good lipo.
these are what the old good nano techs were a few years ago until they changed them to use really bad cells (12mOhm..) and use the good cells for their newer, more expensive series.

Bought one pair of these last month. Delivery from EU warehouse was fast approximately 2 days to the Netherlands. Fit nicely in my stock X maxx. Power the truck good, no issues. Been using them a month now. Good value for money. Probably better batteries out there but not for this price.
Like them so much I want to purchase 4 more. Unfortunately there is no stock in the EU warehouse and also no eta for new stock which kinda sucks. Hope they will be back in stock as soon as possible. Or else I might have to look into some other batteries elsewhere (perhaps HRB…)
When in stock, I do recommend.

A reliable and predictable performer, but less than the Graphene.

I find this to be a great battery for my wing. Lots of power and great quality too.

hard to beat for the price

maybe not the 140C but certainly enough for what im using it for in a arrma typhon with max8 esc on a 1:2 gear ratio on 2050KV. it wont start going UVLO until its really down there. cell ISR seems quite balanced, i measured around 3mOhm theres just no cheaper and better pack out there.
only thing i would change is giving it a anti-spark xt90 plug, it shreds them when the caps are charging up..
i wrapped it in hard plastic and tape since its not available as hardcase variant.