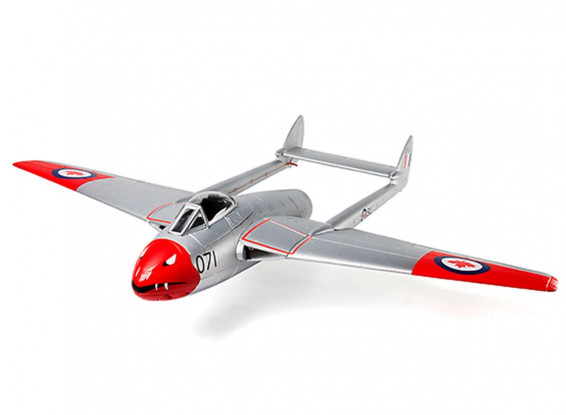 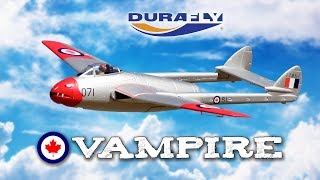 No Pilot in there :(
But the other Itims included....

some hints from my experience | Acquirente verificato

It's a wonderfull plane. Easy to fly but if you have a Gras Runway only, its better to land with gear up directly on the fuselage. Starting with gear down from Gras works without any issue as long as the Gras is short and well maintained. I have strenghened the tail boom with carbon strips 2x5 mm which improves the stability significant and I would strongly recommend it to other pilots.

Easy to fly, easy to work on, and very affordable

For the money, this jet is unbeatable. It is a great beginner jet with mild handling and enough power that it never feels like it is struggling to stay airborne.
Pros:
- Super affordable
- Easy to put together
- Comes with retracts out of the box
- Flies great
- Can take up to a 4000mah 4s without modification
- Very long flight times for a jet
- Great for tinkering and adding more features like rudders or a bigger fan (fits up to an 80mm fan if you get creative)
- Can fit sprung landing gear designed for the eFlite/FMS Viper with only minor modifications
Cons:
- Recommended CG is too far back. Balancing the plane just behind the servo wires for the retracts and ailerons seems to work pretty well in my experience.
- No wing spar. Glue your wings securely or add a spar just behind the wing intakes.
- Tail booms are fragile where they join to the wings. I ran carbon fiber spars along the bottom of the booms on my plane, which is good enough as long as you don't have a hard crash.
- Steering needs frequent adjustment and the front landing gear tears out easily if you land badly.
- Doesn't come with a pilot figure
- Stock EDF is loud and not very durable. The fan on mine exploded after sucking in some sand from my club's runway. I replaced it with a 64mm Mercury II metal EDF.

The only issue I had was that the wires got sucked into the EDF and the plane crashes. The wires need to be tied down before flying

Cool features but not good quality

Price I think is good
Features cool
Quality could be better

Very bitterly disapointed , as of 29/08/22 the plane has not arrived . Even allowing for slow shipping ,this is bad . Seeing the Au branch is closing in September , is this intentional or not . Gazza.

model vampire jet MK6
benefits:
+ well-thought-out design
+ the model can be fast and slow.
+ take-off and landing as in a top wings or a glider
+ powerful engine, high thrust
+ reinforcements on the tail, wings, elevator and ailerons
+ responsible with numerous mods
+ retractable landing gear
+ lots of space inside for larger batteries
+ good cooling for electronics
defect:
- lack of shock absorbers in the chassis
- poor mounting of the front wheel
- no flaps
- no chassis covers
- no lighting and, above all, landing lights
- no pilot figure in the set
- the wings could be split for transport.
In general, the model is nice, although I think that it could cost a maximum of USD 150 in the European warehouse, it is still worth attention. It is very unpalatable that there is no pilot figure which, according to the instructions, should be included in the set. Overall, this is only my opinion and mod suggestions, you don't have to do anything because the model has quite good properties anyway. As for the colors, I think that the HK models should come with stickers packed separately, because most people want to create an individual copy and the paint from the stickers is quite difficult to remove.

Well, after some search I become convinced to enter EDF world with this bird.
+ very fast shipping within Europe
+ simple assembly
+ flies very nice
+ sound is perfect (but also a bit noisy)
+ lond flight time with 3S 3300 (and proper CoG!)
- no manual in box
- many times mentioned issue with recommended CoG, is too rear, needs to be shifted forward
- there is carbon stiffener rod in tail boom, but starts approx. at the end of wing trailing edge, this is weak point (I broke it on both sides during one very bad hand launch)
- also many times mentioned poor attachment of nose landing gear
Anyhow, when it is in the air it is satisfaction. I was surprised that the silhouette is quite well "readable" even with symmetric marking on low and upper surface. Sound is great, scale dynamics due to EDF. Recommended as value for money and as entry to EDF.

Just a fun plane to own and fly.

This jet is just plain fun and easy to fly. I really enjoy it and plan top buy 2 more in the next couple of weeks. Please keep making these. Please bring back the SEA VIXEN

Landing gear nose wheel setup just sucks. And off tarmac or not a very soft landing and it will just collapse. Boom attachment is still a very weak spot.
Flies great just take out the landing gear or belly land on grass