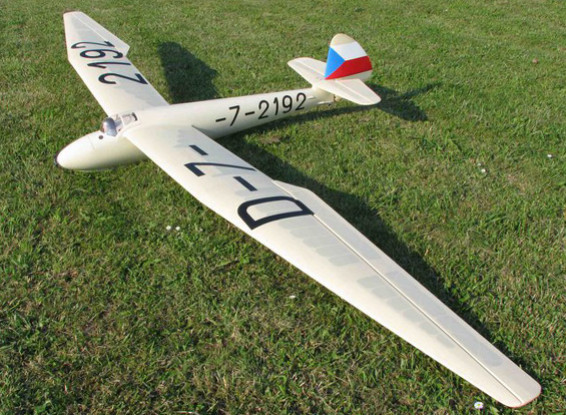 You will earn 482 bonus points for buying this item.

The Minimoa Go3 is a single-seat sailplane produced in Germany. It was designed by Martin Schempp and Wolf Hirth and was produced the year after their first glider, the Goppingen Go1. It first flew in 1935, The name is derived from the cloud formations called Moazogtl. The name was used for one of Hirth's earlier gliders and since the Gö 3 was a smaller version, it was called "Mini" or "Mimimoa"
The Minimoa established several records, including the world altitude record of 6,687 m (21,939 ft) in 1938 in a thunderstorm. Richard du Pont and Chet Decker flew Minimoas to win the US Championships in 1937 and 1938. Constructed from wood and fabric with cantilevered "Gull" wings, the undercarriage was non-retractable and it was the first glider built to carry water ballast in a tank behind the pilot. Only a handful of original gliders exist today.
This 1/5 semi-scale model has a 3400mm wingspan and a flying weight of 3600g. The wing is a traditional balsa construction being fully CNC cut and professionally covered by Oracover. The structure is visible through the covering which gives it that special glider looks in flight. This high quality glider has CNC cut elevators and control surfaces. The wings are equipped with air brakes and a fiberglass fuselage manufactured from quality glass and designed with strength and weight in mind.

Attention to detail in this Minimoa Go-3 are paramount. The Go-3 Minimoa is the symbol of vintage gliders, created in 1930's and designed with it's very distinctive "gull" creates a sense of nostalgia and romance.

All these features combined give you a fantastic thermal glider with modern performance and stable flight characteristics, character, and charm of the golden era.