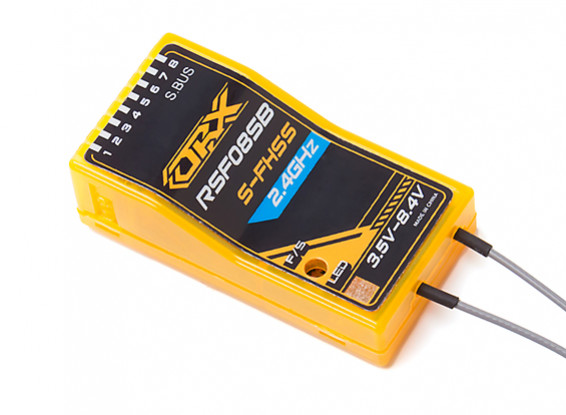 The OrangeRx RSF08SB has all the qualities that you've come to expect of the OrangeRx brand, this one operates using the Futaba compatible FHSS-2 (Frequency Hopping Spread Spectrum) and S-FHSS RF protocols. This receiver supports 8 channels using its SBus output which is in itself an excellent feature for use with multi-rotor flight controllers such as the KK2.1, APM, MultiWii and others. It also has 7 conventional servo outputs for those wishing not to use the SBus feature or you can combine the Sbus with the conventional channels.

The single line connection of the SBus is a very neat way of wiring your model, it removes the need to have additional wire leads for each individual channel and keeps all the wiring neat and tidy. SBus is also perfect for large models and gliders that utilize a lot of servos, especially in the wings, once again it reduces the amount of wiring and keeps things tidy.

About Sbus:
SBus is different from conventional systems as it uses data communication to transmit control signals from receiver to servo, gyro or other SBus compatible devices. This data includes commands such as "move channel 3 to 15 degrees", or move channel 5 servo to 30 degrees" etc. The SBus devices execute only those commands set for their own channel, in this way it can be used for connecting multiple servos to the same signal line.

The receiver will also accept a wide range of input voltages from 3.5~8.4V which is great if you use LV and HV type servos.

Compatible with the following Futaba FHSS 2.4Ghz air systems: 6J, 8J, 10J and T14SG. If using the TM-FH RF module then the fail safe can only be set on 3 channels.

All my Orange Futaba compatible receivers have worked flawlessly.

I used it in a old Hobby People Blue Max, I have flown it several times with out a glitch. Great inexpensive receiver.

Works as Well as Futaba

Works as well as Futaba and not had any problems over the years, however, having to buy from abroad and not the UK warehouse is a pain in the backside.

This product was the right one for my receiver. Fast delivery.

Bought four of these for my Futaba t8j , and so far so good, no complaints , quality seems fine too. Time will tell but I’m hopeful