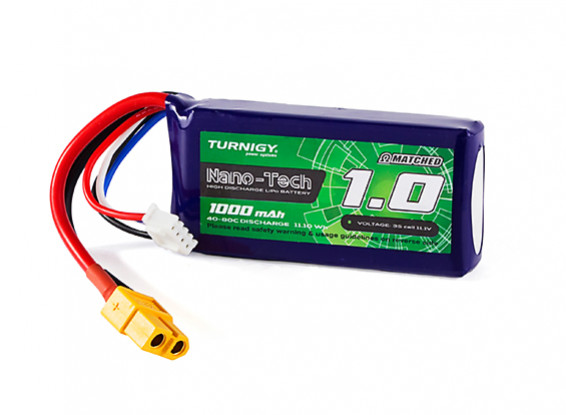 More than just a fancy name. TURNIGY nano-tech Lipoly batteries were designed from the ground up with serious performance in mind. Utilising an advanced LiCo nano-technology substrate that allows electrons to pass more freely from anode to cathode with less internal impedance. In short; less voltage sag and higher discharge rates than a similar density lithium polymer (non nano-tech) batteries.

NOT CHARGING AFTER 8 TIMES

On the 8th use and the only time I discharged it to were it started to slow down on the motor, I immediately stopped using and put straight on charge. That was it, completely flat now. Will not charge now. Not sure if these Lipo batts are that sensitive but that's crazy to me. Purchased End April 2021

Best value in LiPO's. Treat them well and they will provide long and reliable service.

These are good batteries for small airplanes.
Got a few and they work fine.

Much better than expected, do the job perfectly.

A great battery for the EZIO glider.

Declared a lot of C

This battery as many turningy or grafene declares an amount of C that measuring it then is not true. Useless to pay more for a 40 or even 70 C if then the capacity is 25 or 30 max.

Great LiPo. Very good experience, up to now! I am looking forward, how it behaves over time, compared to the classic Zippy LiPos :-)