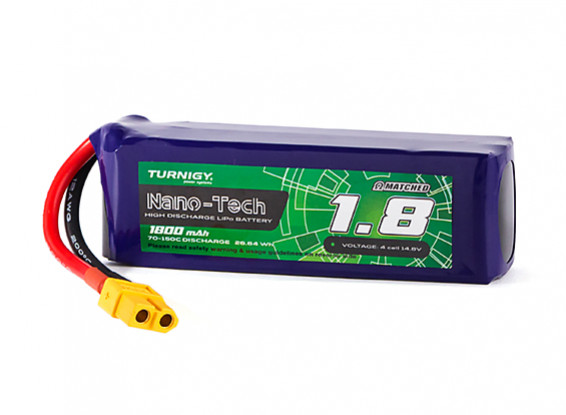 Turnigy Nano-Tech have always been a leader of the pack. Now they are even better than the Nano-Tech Plus +. The Plus + batteries have been designed for those that want acute discharge from their batteries for leading performance with extra punch.

The Turnigy Nano-Tech Plus + offers ultra-high output with 70C constant discharge and 140C bursts (1~3s) for that extra edge over other battery packs. For pilots, it spells stronger throttle punches and unreal straight-up performance. Excellent news for 3D and EDF pilots as well as all the racing drone fliers.

The application of nanometer conductive additives forms ultrastrong electron-conducting networks in the electrodes, which can increase electronic conductivity. This nano-core technology is the soul of the Nano-Tech Plus + lithium-ion batteries.

Great battery with the added option of removing the balance cable and connector. This allows battery to fit nicely into EFXtra Racer.

Seems to be an good idea but not for everyone

At frist sight the removal connector for the balance plug seems to be a ggod idea but ... When you want to use a lipo saver it is more complicated. Once it is plugged to the battery the balance plug waste a lot of space around the pack making it impossible to fit in a plane like EFX Racer or hard to place under an 450 helicopter size canopy
JM.

OK battery but not brilliant

I don't like the removable balance plug, although I do get that it saves the balance wires from breaking. The connector just happens to get in the way on one of my models. Also I didn't get very long, less than 5 minutes flying on a lightweight profile model with ducted fan, that's less time that I get with a 2200 3S, and the 4S came back exhausted!

The battery weighs 212 gr without the balance connector. It is used on a efx racer. Able to supply all the power the plane needs at 150kph . No problem charging discharging . internal resistance is around 5 mOhm to start with. If used with efx racer or similar fast panes check CoG it is not a heavy battery . full forward worked for me.

Great battery pack, a lot of power, the detachable baalnce plug is a real plus.

This battery is perfect for Racing drone. A little big but powerfull as much as I wanted.
I am using on a Iflight Nazgul 4S witha 45 amps and it is not even warm at the end of the flight.

Good solid LiPo. Used it 20 charges now. No Problems. Good weight. It is possible to remove the balancer cable which is a big benefit during flight. I use it for a 2205 Motor and 60 ampere ESC combo on a 250 mm frame. I would buy ist again.