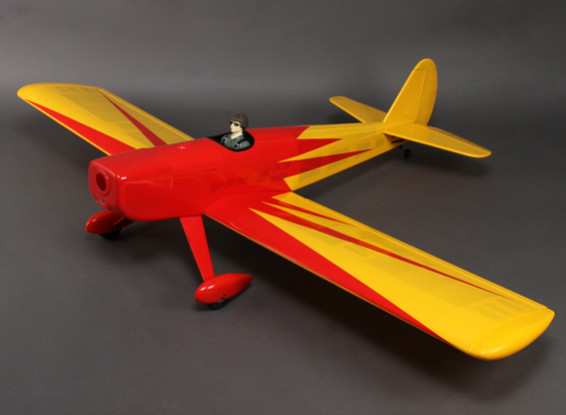 You will earn 67 bonus points for buying this item.

This is a very good ARF from VQ models.
Nicely built and finished. Good quality fibreglass cowl. Accurately built. Forget the supplied spinner and control horns and buy something better, but the pilot is good.
I fitted an SK3 4250-500kV driving a 13x6.5" APC prop. This worked out well with plenty of power for normal aerobatics and general flying. It feels right!
As I wanted the option of using a 6S 5200mA battery as well I dropped the battery tray 15mm to an obvious step in the former and moved the servo bay rearwards to allow adjustment rrom for the battery position.
This worked out well with the c/g, with no holes required in the firewall as the batteries sit just behind and balance the c/g ok.
The only other niggle was the pre-drilled holes in the u/c covers. Some of these are in the wrong place, so drill your own, allowing a space to the fuselage to allow for the u/c to flex backwards a little.
She flies just great. Fast but very well mannered, gentle stall. Needs a bit of room to land as tends to float at speed on landing. Quite arobatic and some vertical performance at just 30A measured. Best with a 3500mA 6S but still ok with a heavier 5200mA 6S set-up. There is always an option to up prop to a 13x8 for more power later, but you my not need it. Love it ! PS I did add some epoxy around the u/c internals to strengthen before fitting the battery tray. Suggest this is worthwhile as difficult to reach later.....

Rec'd the plane in good shape. But disappointed with the quality. Harder to put together than should be for an ARF kit. Parts don't fit together well, and low quality components. Changed many out for stuff I was lucky I already had (control horns, etc). They nylon wing bolts were not even usable. But that said, you can't expect too much from an $80 kit this size. Once I finished building, plane looks pretty nice. Have yet to fly it but overall reasonable value.

Thought I would follow up with the maiden
Absolutely awesome kit which flies with no nasty tendencies. A couple of clicks of right aileron and up trim and she was flying straight and level. Liked to drop the right wing on the stall but otherwise well mannered. Follow the control surface travel and CG exactly as per manual, although I still set dual rates with 20% expo across the board. Plenty of power on tap with my setup, happy to cruise at 1/2 throttle with a 5 minute flight time and plenty left in the battery pack. The little lug which guides the tail wheel ripped out of the tail so this will need to be modified and the landing gear is a little on the soft side but easily straightened. Definitely likes a calm day and landing is an absolute breeze in nice conditions. Overall an excellent model for a relaxing flight and looks great in the air. Thanks VQ & HK

Another nice VQ model sold by HK. By far the best instructions I have come across so far in an ARF. Fairly easy assembly with only a few minor issues which are easily sorted
Bin the supplied wing bolts and replace them with quality items, incidentally the wing securing holes don't quite line up so small mod required by way of enlargement. The internal diameter of the push rod tubes are too large in my opinion for the supplied pushrods so I found that I can slide 3mm plastic tubing up inside the existing tubes which gives the rods a far better snug fit. I am using the recommended Hextronic digital servos which are a perfect fit, a SK3 4250 500KV outrunner, 70amp Redbrick ESC and Turnigy 13x6 wooden prop. Bench testing showed 35A 850W on 6S so I will see how she goes
Ailerons are already installed but as a general rule I always go over all joints/hinges with CA or epoxy as required. I wont use the supplied pushrod horns, even though they are steel as they appear to be poor quality. Very nice outrunner adjustable mount supplied, cheap looking spinner so will replace. All in all a great ARF with good quality stick on covering that looks great. Landing gear seems a little on the light side but I like the good size wheels and spats
Nice touch to include extra covering in both colours along with a decent pilot, strong magnetic hatch and supplied battery tray
So far impressed with this ARF and with the added bonus of free shipping, is excellent value for money. looking forward to finishing the build and the maiden. Thanks HK

When I looked at real Spacewalker photos, I realised that they have tail wire rigging and sprung struts on their undercarriage, so I added Tail wires and the sprung strut details to my Spacewalker, Photos included here. These are "stand-off" scale mods, no turnbuckles used! I also added a fake pitot tube to the leading edge of the fin. I like fitting fake pitot tubes to all my balsa models, which I use as a damage indicator and reminder to check the airframe thoroughly if the Pitot gets loose or damaged in any way, by way of reasoning that if the pitot got knocked askew, then there is probably damage elsewhere on the model, whether caused in flight, on the ground or during transport.
Also, in the Strut & Motor Box pic I uploaded, you'll see (through the cowl) the custom motor box I had to build because the PropDrive 4238 motor I used was too short in length to fit onto the supplied stand-offs.

My Spacewalker turned out to be a really nice model, here is how I did it :
The build and finish quality is about what I expected after reading reviews, where people had different experiences, mine was pretty average all round, and at least there were no warped parts except for a minor built in Rudder warp. I had to repair a stringer that was broken, probably while I was handling the plane during the build, but it may have been due to a flaw in the balsa where it joined a rear bulkhead, anyway, I had to cut a section of Yellow covering material on the underside to access the break so I could fix it with epoxy resin.
The Covering material is weird, it's just a giant sticker, albeit, it seems like a good quality sticker. The covering is heavier than normal and just melts/sags in sunlight, it's bizarre, then it cools and shrinks in the shade. I think that airflow over the plane is enough to cool the covering film enough to shrink tight during flight, and after a dozen or more batteries that I've flown, I can't think of once that I saw the covering loose in flight or fly-bys, but I have taken off with saggy covering! The upside is that you get a couple of generous repair samples of the sticker covering, which is actually a joy to work with, it's so easy to apply and work with.
The first thing I noticed out of the box was the peculiarly narrow strip ailerons, so I googled up some images, and mine seemed narrower than all the pics I saw, also, the trailing edges of the ailerons were about 5mm thick! I decided immediately to add more area to the ailerons and this meant I had to add a small section of wing trailing edge (30mm) to each of the inside wing panels near the fuse. It also meant that I could feather the trailing edges down a bit finer from the existing 5mm thick. I ended up adding 15mm to the trailing edges of the wing, almost all of it to the ailerons. (See my uploaded pics)
The product description describes a long tail moment with stability benefits, well, this is not true, as this plane has a relatively short tail and a smallish Vertical Stabiliser, so I added a Dorsal fin ahead of the Vertical stab, as you can see in my photos. It probably is not needed, but the mod was easy to do, and it makes my Spacewalker unique I guess :)
I fitted a HK 4010 820kv Donkey motor, and after a dozen or so batteries, I managed to burn off a couple of magnets from the motor's can while heat testing with different large props. The motor seemed too hot on this 2.6kg plane, and I needed better ventilation for the engine bay, so I took the plane home to fit a 4238 PropDrive 750kv motor on 4S.
When I unboxed the 4238, I was astounded at the small size, and I immediately wanted to return it, as the can (stator) length was only 18mm, and not 38mm like the model name implies...... but after considerable deliberation, I decided to try it anyway, it was, after all, rated to 780 watts, and looking at this light weight little motor, you would think, "No Way!"
Well, I test flew it today with the new motor, it had plenty of power and stayed cool on a hot day in Queensland.
At 750kv on 4S, the little motor was missing some high end rpm, but the 14x7in prop fitted had plenty of thrust and speed for my flight envelope, and didn't lack at all for this sport plane.
I also scrapped the wired undercarriage and built a custom one piece aluminium undercarriage, considerably longer than the original, but maintaining the original width. This results ina better stance on the ground, it's lighter, and easy to mod using included components from the extensive hardware included in the box.
The SpaceWalker is a great flyer, I needed this plane, something to relax with and fly when I'm not in the mood for flying "on the edge" with my more expensive aerobatic models. Also, this plane is the right size and weight (keep the build weight down!) to make a really nice intermediate trainer type, or second plane for someone coming off a trainer.
When I glued the wings together, the included plywood joining spar was not a tight fit vertically, this allowed to make slight variations in the final dihedral angle when glued, so
I opted on the minimal side, without opening too much of a gap for epoxy to fill on the upper wing join surface, I recommend this as the plane is very stable and doesn't need much dihedral to keep it that way, and the plane aerobats fairly well with this arrangement.
Another surprise was the symmetrical wing section, (or nearly symmetrical - I haven't measured it), I was really happy about this, as many Spacewalker models use a Clark Y or other flat bottomed wing. Also, the wing decalage is set to a low angle of attack and it produces a surprising amount on lift in this configuration.
The manual says the thrust lines are preset to the angle of the built-in firewall, but I found that this was not the case, and my model needed additional down and right thrust to get co-centric with the Cowl's motor shaft opening. A look down at the completed model with the cowl looking nice and straight down the centerline of the aircraft, and everything lined up perfect, the plane flies perfect, just like that! I have not trimmed my model ever, it's amazing how sweet this thing flies at zero points on all surfaces.

I like this model.....it is nicely built and flies well.....I have a 4 stroke 52 in it but I think it would fly on less depending on the all up weight

this is easy to assemble model and a good price

this was an easy model to assemble and a good price