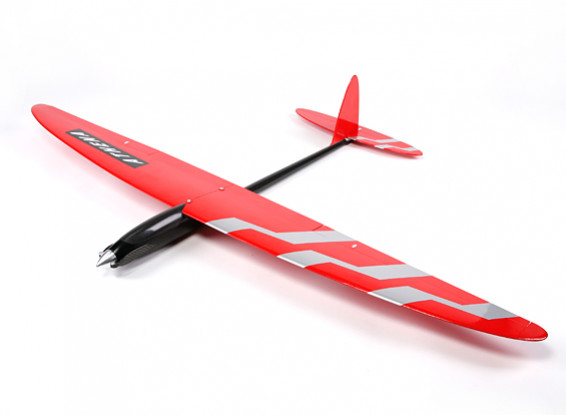 You will earn 333 bonus points for buying this item.

Plug and fly isn't just for foamies anymore. The Athena electric sailplane is a high performance, high quality airframe with all the electronics pre-installed. Designed to be a competition level sailplane for the discerning pilot with little time to build.

This model oozes performance and quality. The Athena has a carbon fiber fuselage molded in epoxy resin, not cheap polyesters. The built up wing and tail feathers are made of the highest quality balsa available. Covering those surfaces is premium Oracover plastic film covering. The wing arrives as two pieces, just needing to be joined with some epoxy to make it 1 piece. Pushrods feature ball link ends for maximum precision and zero slop. Even the control horns are airfoiled to further reduce drag. With such a nice model, it was screaming for good components so we have outfitted the Athena with digital metal gear servos, with the high power brushless motor spinning a carbon fiber folding propeller attached to an aluminum spinner. The blade yoke on the Athena is a twisted style which is designed to allow the propeller blades to fold flatter against the fuselage reducing drag significantly compared to a traditional straight yoke.

Flying the Athena is a treat. The slop free control system and rigid construction yields crisp response and on rails flight precision. The low weight, and sleek construction means it climbs to altitude fast and thermals with ease. This a great airplane for those wanting performance, but not wanting to spend a lot of time in the workshop. The Athena is a great model for ALES competition since it climbs quickly and thermals well.

Great build quality over all (minus servo arm that has broken for almost everyone during shipping, but that's a packing issue, not construction issue).
This has been the best airplane I've flown so far! Unfortunately crashed two days ago due to receiver issue. Would have purchased again if the Athena was available!

The Athena was on sale so the value at sale price was great. All the parts are of top quality. with digital metal gear servos, C/F fuselage, Oracover covering. ball link pushrod ends. One was broken due to poor shipping but I already had a spare. Building was fast an easy. Yet there was no English manual to help with assembly. Not needed. Looks good will maiden soon. Very please with this kit would recommend to all.