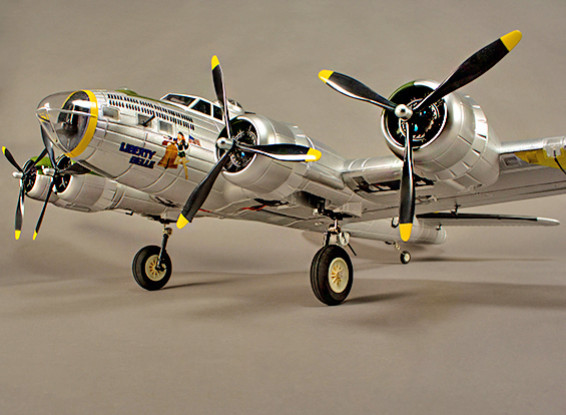 You will earn 256 bonus points for buying this item.

This B-17G was purchased by aviation enthusiast Don Brooks, who formed the Liberty Foundation to exhibit the plane as the Liberty Belle. Restoration began in 1992 with parts from another damaged B-17 (44-85813), performed by Tom Reilly and company/Flying Tigers Warbird Restoration Museum (aka "Bombertown USA"), located at that time at Kissimmee Gateway field, Kissimmee, Florida. She returned to the air on December 8, 2004, and had been touring the air show circuit since then.

Sadly she was lost on the morning of June 13, 2011, Liberty Belle made a forced landing in Oswego, Illinois, after taking off from Aurora Municipal Airport in Sugar Grove, Illinois. Shortly after takeoff, the pilot of a T-6 Texan chase plane informed Liberty Belle's pilot that the B-17 inboard left wing was on fire and advised an immediate landing. The bomber landed successfully in a nearby field and the seven people aboard were able to evacuate without injury, but due to the muddy ground the fire engines could not reach it......

This huge plug and fly B-17 pays tribute to Liberty Belle. Very simple and fast to assemble, with all servos & ESC's pre-installed. It is made from EPO foam, so it is tough as you would exepect and as the 1pc wing is removable, it is also practical. The pre-fitted electric retracts & wheels are large enough to tackle almost any surface and with plenty of power on tap from the four brushless motors spinning counter-rotating props, smooth take off's are a cinch, the pre-fitted split flaps ensure that landings are also drama free.

There is plenty of scale detail on offer, including the guns & ball turret, the Pratt & Whittney "engines", three blade scale props, working navigation & landing lights and so on. We have flown this B-17 extensively, it is easy to fly and so graceful, a scale flyers dream, this model has real presence in the air and is bound to become a star at your airfield!

awsom plane,at the ground or in the air no matter,looks and fly great,,some built time but all i all no problem,,love it

Ordered thru the Australian warehouse it arrived in good condition. Its an easy assembly and does not take very long. Taking advice from other reviews I ordered a full set of Master Airscrews at the same time. I fitted the standard blades & the very first time I ran the motors up one prop exploded from the hub damaging the engine cowling of the next engine.
My advice, DO NOT USE STANDARD PROPS. immediately replace with a full set of master props. Bear in mind there are absolutely no spare parts available for this plane except the crappy and potentially dangerous standard props. The total lack of spares will eventually be the undoing of what is actually a great aeroplane. One change I made when assembling was to mount the receiver fully connected then velcroed to the centre of the wing. I then cut out a large rectangular opening in the fuse where the wing sits to accommodate the receiver and wiring. This means I only have to connect two plugs to the receiver, elevator and rudder and feed the two battery leads into the cockpit area where the batteries live. Makes fitting the wings a two minute job and keeps all the wiring really neat and all on the wing, simple. To fit the replacement props I used TWO nuts tightened on the motor shaft. The prop goes on next with a third nut to tighten the prop on the first two nuts to locate it. The nuts form a tight fit into the pr

Received my Liberty Belle yesterday and assembled the basic airframe last night. Plane looks great and the finish is very nice. This thing is very big.... Will have to see how I get it to the field and back :-).

Quality of the parts look very good to me, off course I haven't flown it yet, but it looks and feels very good. Retracts work good to and look very sturdy. I'm planning on fitting them somewhat deeper in the nacelle (for looks), but for now this will do. During testing however one of the two was acting somewhat strange, but after a few tries it started functioning normally (it reversed once - after remainig in when I activated the retracts it came out when I retracted the other one after that it refused to work - I powercycled and the quirk disappeared). Motors look exactly the same as the motor for the Arttech spitfire, ESCs have 3A UBECs (that's what it says on the labels). During my testing the ESC became somewhat hot when there was no motor connected, so only powering the BEC and the retracts - maybe the retracts use a lot of juice and is that an explanation for the strange behavior.

All in all I think this is a great plane for a very nice price point. I'm going to spend some time to check everything and make it to my liking, but that's the point of the hobby.

My biggest minus for now is the main wing, it has no reinforcement whatsoever. Also no cavities for rein

The model looks impressive on the ground, has great presence in the air and is very realistic in flight. Plenty of power available, great sound from four props.

I just got it in was less than 2 weeks and hell yea im excited about getting it in the air, ! question tho, is there a way to get the landing lights to STOP flashing and just stay on ?

Just completed 5th flight and I am loving this plane. It took a day to assemble as I checked every part to ensure proper functionality. After reading other reviews I didn't try to use the stock props and used MAS props with parkzone spinners from the start. Looks just as great in the air as it does on the ground. Flies like a dream and is very easy to land. I am using 2 Turnigy nano-tech 2200mah 3S 25~50C Lipo Packs and get about 5 minuets flying time with 30 pcnt charge left and found you only need 1/2 throttle for a good scale flight. Excellent plane HK.

there are no "Live Chat" services. And my request is over 4 days old. Come on people how about some customer service.

When I received this aircraft it look great in the box with everything taped down. I managed to find a couple of lipos I also ordered buried in the box. Everything looked fine so the box was put away until my birthday, July 4, Really

Easy to put together. Instructions were fine. Plane looks great except there was no ball turret or guns in the box!!!! It seems when they put in the batteries they took out the ball turret and guns.

I have requested the parts two days ago and my request has not been assigned yet in their 24X7 support.

I expect them to send the parts without and issue. We will seen. Until then the maiden flight is on hold.

If they give good services on this issue I will increase my rating, but since they have not assigned the problem yet I am concerned.

I received my B-17 from USA warehouse in great condition. This plane is big. I also ordered replacement Master Airscrew 9X6X3 for imporved prop performance over 1/2 throttle.
So far things look good. I am creating space in my workshop to build. I would like to add pilots if possible.
I will update as the build / flights progress.

Maidened mine today with no problems. Needed no trim whatsoever and flies beautifully. Running MAS 9x7x3 props on 2 x 3S 2200. Got tops of 5 min flights. Will maybe try 4S 4000 next time. Had 3 more enjoyable sorties and very, very happy.Landings are a breeze and I found flaps not required at all.Looks great, flies great.Happy days.