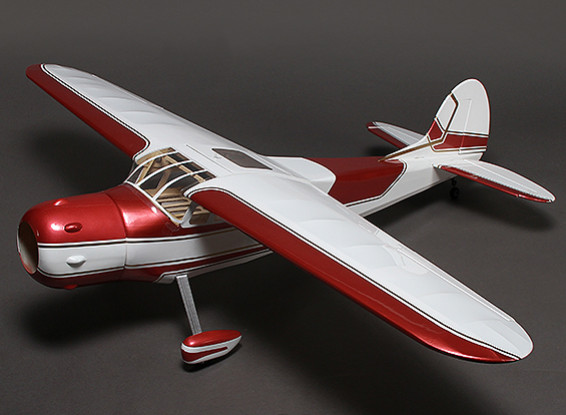 You will earn 80 bonus points for buying this item.

The Cessna 190/195 were Cessna's only postwar radial-engined aircraft. The prototype 195 first flew in 1945 just after the end of WW11 and entered production in 1947. The Cessna 195 was Cessna's first airplane to be completely constructed of aluminum and featured a cantilever wing similar to the pre-war Cessna 165 from which it was derived. The Cessna 195 fuselage was quite large due to the fact that it had to accomodate the large 42"radial engine upfront. The Cessna 195 was expensive to purchase and operate for private use so therefore Cessna marketed them mainly for business use under the name "Businessliner" and could carry up to 5 people in relative comfort.

The Hobbyking Cessna 195 captures the elegant yet brutish looks of the real aircraft and the chosen color scheme is in keeping with this era of classic types of Cessna's. Due to its generous wing area the Cessna 195 would make a very good first scale project, it looks really good in flight and has reasonably gentle handling characteristics so it is perfect for pilots with limited experience as well as for the more experienced pilot who wants an aeroplane that is just that little bit different.
The Hobbyking Cessna 195 is of balsa and lite ply built up construction, all parts have been beautifully CNC cut which makes for a very light but strong airframe. A large glass fiber cowl is supplied which allows plenty of room for your chosen motor (with standoffs) and the undercarriage is a single leaf dural type alloy with glass fiber wheel pants. The Cessna 195 requires some construction work, the horns and control surfaces require fitting and also the tail sections require glueing into place and of course the motor and R/C equipment need installing but 2 or 3 evenings of work should see the Cessna 195 ready for the skies.
Assembly at the airfield is very quick and simple, the wings slide onto a carbon tube and then 2 bolts are used to secure them in place, these are very accessible through the generously large removable hatch on top of the fuselage, this hatch also provides quick access to the battery area. All in all a very nice easy to construct and fly scale model which will be admired on any model flying field.

Ok Gents and Ladies, I have finished the build and testing of this kit . this is the set up I picked. She is built to run on 4S a Turnigy 2850 balances her very well. I installed an NTM Prop drive 35-48 900KV supplied by a Turnigy Trust 55 amp esc. this is driving a Master air screw 11 X 7 fitted into a scale spinner. I also built a scale instrument panel and semi scale interior into the kit. and put in a dummy radial engine out of another companies 1100 MM Waco. Her are my thoughts. This kit is great for scale upgrades. it is very strong and easy to transport. The set up I used allows for way more than scale power and this plane can handle a 15 to 17 MPH wind. she still can slow down and land like a feather. I am really glad I bought the kit. took one star away for no spare parts, and the windscreen was poorly molded. I really wish I could get a spare cowl and replacement windscreen. Oh yes really check the glue joints I had a couple on the firewall and landing gear mount that were a bit weak. covering is lovely and paint is perfect. I would buy again.

Maiden mine today.Stable and can fly low but not to slow in the turns.Its a plane to admire scale flying.Battery hatch from under side.Assembly easy exept rudder-tail Wheel and cowl mounting(need smal hand or long screwdriver).I use mini and Micro servos,3000mah 3s 20c battery,D4023 850kv motor 30A blue series esc and 11x4,7 prop.I will change to stronger setup later.It looks great.