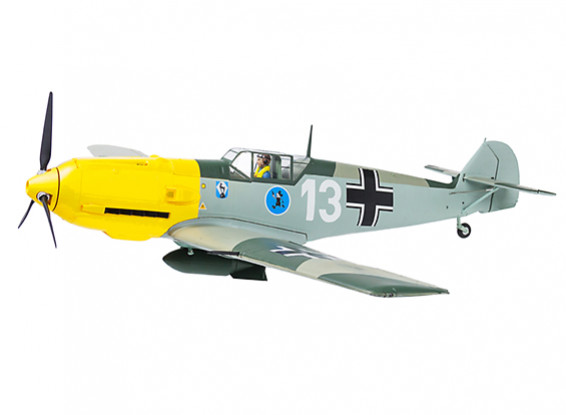 You will earn 148 bonus points for buying this item.

The Messerschmitt Bf-109e was the backbone of the Luftwaffe fighter force during world war 2 and one of the most iconic aircraft of the period. It was one of the most advanced fighters of its day and powerful piece of hardware for the German military war machine. Durafly has accurately reproduced the plane in two stunning schemes. One based on the 1940 Battle of Britain with the menacing "Yellow nose" and the other a 1941 tropical camouflage used in the Desert campaign.

Originally designed by Willy Messerschmitt in the mid-1930’s the Germans constructed over 33,000 Bf-109’s between 1939 – 1945 and they were flown in many theatres of operation. The Bf-109e was a fierce adversary for allied fighters such as the Hawker Hurricane and the legendary Supermarine Spitfire. With its lightweight design, retractable landing gear, destructive 20mm cannons, powerful Daimler-Benz liquid cooled fuel injected inverted V12 the Bf-109e would have made the Luftwaffe pilot feel nearly invincible.

Durafly’s 1100mm Messerschmitt Bf-109e is a fantastic scale rendition of the famous Luftwaffe fighter. The Durafly team has worked extremely hard to bring you the Bf-109e which is undoubtedly the best looking RC Bf-109e ever made. The Durafly Bf-109e has a modest 1100mm wingspan, scale electronic retracting landing gear, scale flaps and a powerful brushless outrunner motor spinning a three-bladed scale propeller. Power is provided by an AeroStar 3736-770KV motor, AeroStar 50A ESC and when combined with a 2200mAh 4S Lipo battery this gives an outstanding performance to this agile WW2 fighter. There is even a fully functional bomb drop system complete with scale bomb.

Love the plane, in fact I love it so much I've purchased 3 of them.

I waited quite awhile for this to get restocked in the US warehouse and it is well worth the wait. Very happy I was able to buy it.

Shipping was fast. Product as described. Easy to assemble.
Maiden has not happened yet. But I expect no issues.

GREAT PLANE IN FLYING AND STATIC

Pleased with this product, quick delivery from the UK warehouse.
I will not be purchasing any more products from Hobbyking due to a non delivery issue on my previous order not resolved by support team resulting in Hobbyking refusing to refund my money.

Excellent is all respects

This is my second 109, and I like it as much as the first. The decals in this one are all the type you can easily apply, and then "seal" them into position with low heat from your covering iron. They look fantastic and seat well, no lifting at all. Parts fit is excellent, motor, ESC, servos, all the best out there. Room for a 9 channel receiver, 2200 4S battery, and gyro too. Retracts work well, all surfaces align perfectly. These sell out quickly. Do a backorder if you have to to get yours. This one is a 10!

Love everything about this little bird, price was right,, fitment was good and everything went together without a hassel. Some complained about the decal/stickers not being any good (I've had experience with this type of sticker before so that helps) also went without issue for me. Use a little heat, on low with your iron, after aplying them with care, and it will turn out nicely. Use a rag between your iron and surface to be sure not to leave iron impressions. Easy peasy. Enjoy!

This is a great scale plane. It flies very well, and is easy to takeoff and land. I had a gyro in mine, and flew it with a four cell battery that made it perfect on balance and speed. The bomb drop is fun. I did have one retract fail but HK sent me a new pair super fast. I ordered some spare parts as well, but haven't needed them. I'm going to buy a second one. Thanks for a really nice plane HK. Durafly makes great stuff.

Good in finish on the whole, but some minor scratches found on the hub

Good in finish on the whole, but some minor scratches found on the hub.
Should buy some more for spare after clashes.

A good quality model with some reservations

The model itself is excellent but the instructions which had to be downloaded were very poorly translated and gave no information on connecting up the servos and receiver. If new to this hobby stay clear. I eventually managed to get all working great but certainly not a model for someone with little experience. I am new to electric and was pleased to eventually get my head around it all. The transfers were torn on one sheet and had to purchase a new set but were cheap to replace.