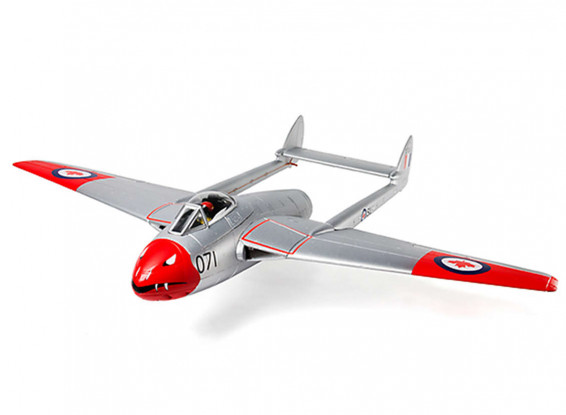 Internal fan was kinda loud, I ended up swapping it out with a higher blade count I had on the bench. and it is much happier with the CG moved way forward from where it is in the book

it took way to long to get my order (40 days) and the air plane banged up and missing some parts,but I figured out how to get the plane done and flying,i didn't tell hobbyking anything becuz it would of taking way to long,the is a little over priced, i don't think ill buy anything else from hobbyking sorry

Good plane, easy to fly as a first jet experience

If you are perfect in landings on the right surface, it is all good. The undercarriage is not designed for hard touch downs, it will bend and then it's hard to correct that. Front wheel steering set up is a joke, I have replaced it with a fixed wheel right after the first flight. Of course then you can't taxi it much on the ground, just walk and pick it up ;-) Anyway, overall not bad but you get what you pay for....

Not bad for my Firdst EDF

I have had this EDF for about 8 month at the time of writing.
I've never been impressed by Durafly in the past but this seem like a good idea for my first EDF. relatively inexpensive, simple, easy to repair.
I reinforced the Tail booms at the wing with some Carbon fiber based on past reviews of them snapping off. I have not experienced and issues there.My main complaint is the nose wheel retracts and steering. The push/pull wires for the nose wheel steering were loose from the factory and that caused the ground handling to be very sloppy.Neutral on the nose wheel would never stay the same so sometimes it would veer left sometimes Right.
Once I tighten the Push/pull wires it handled much better on the ground.
in the air I found that you needed to make sure the Battery was ALL the way forward or it would be tail heavy and almost uncontrollable.
A 3000 4S battery helped there plus the addition of 1/4 oz of nose weight. With those changes it flies great, but Rudders would be a nice addition. Someday I'll get around to adding that. Landing was a bit of a challenge The jet just wants to glide forever so just gently push the nose down, flaring just before the wheels touch. landing on the mains first is a must. I get about a 4 minute flight with a 4S 3000 with about 25% remaining in the battery.
The Vampire does really look in the air. Low passes are really impressive.
Not super fast but just right for those of us trying to make the transition from Prop to EDF. In the 8 or so months I've had mine it has suffered it share of mishaps mainly on the nose which has broken off a couple of times and is now reinforced with tooth- picks. The booms, tail assembly and wing have held up fine. crashes caused by EDF pilot inexperience not poor craftsman ship.
Not a bad value for an intermediate flier who is not afraid to experiment and dink with the model.
I do enjoy flying mine. I get a lot of good comments at the field when flying the Vampire.

In the yestarday review I did forget to add that I did use the flaperon system in order to be ablme to use the ailerons as flaps also.
It is a good improvement.

The power is now there, the pilot is too small but I did rearrange the cockpit interior and chnged the pilot. The landing ger is a disaster. I did insert crbon pins in the foreward leg, changed the wooden base and increased the size of screws. I did arrage a fore folding protection for the retracted gear. For the main struts I did insert two carbon 3mm pins in each , reinforced the landing legs base and protect the same with additional composite wood . Anyway the belly of the plane is protected with a self adhesive plastic sheen and I land on the belly to avoid damaginf the landing gear which has not shock absorbing system. Using a 2800 mAh 4S the plane is very responsive. In order to have more rudder authority I did arrange a single servo which is controlling both rudders. To keep the CG in the right place I did add 10 grams of ballast in the nose. The Canadian editon is a big imptovement on the original poor performance of the original Vampire which could take off only on paved tarmac of at least 75 meters of length. I like the plane and it is easy to fly, unbelievable soaring with almost no motor power applied capacity.
Best regards