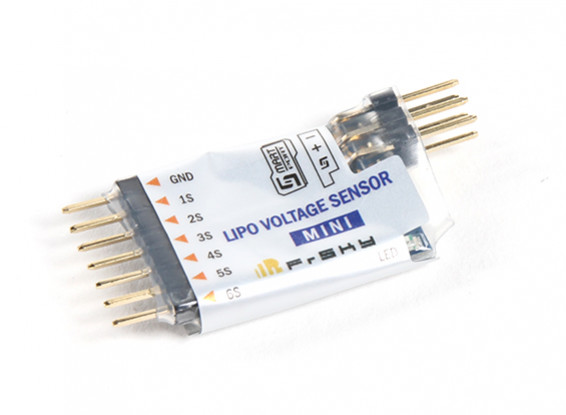 For those with smaller, weight critical aircraft FrSky have released the Mini Lipo Voltage Sensor w/ Smartport, a mini version of the FLVSS and designed to collect battery data which can be transmitted via the smart port of telemetry-enabled receivers such as X8R, X6R, X4R, etc to a Taranis transmitter

By removing the OLED screen from the original FLVSS and reconfiguring the remaining circuit FrSky has managed to reduce the size and weight of the original by almost 50% which is ideal for smaller aircraft models.

The functionality of the MLVSS is identical to that of the FLVSS except that you cannot connect two of these in series to measure voltages in excess of 25V (6s).

I use this voltage monitor with OpenTx/EdgeTx in conjunction with voice alerts to let me know if the battery is done. You do have to be careful not to reverse the battery polarity (apparently it will fry!).
I use a balance port extension cable to prevent this happening (leave the extension lead plugged into the voltage monitor).
An inexpensive way to prevent your Lipo from being over discharged.

Item as described, fulfills its task

Top quality. Works like a rocket. Price quality super. Easily Connect with any transmitter. I will definitely order them back. Thx Hobbyking

Top quality. Works like a rocket. Price quality super. Easily Connect with any transmitter. I will definitely order them back. Thx Hobbyking

Easy to install. Does its thing very well. Worth it