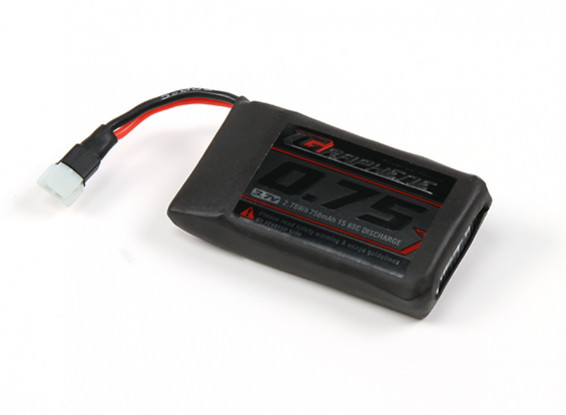 This particular battery has a 2-pin Molex connector. Please refer to the attached image as this Battery has the "B" plug polarity. Please make sure this battery suites your connection. The wrong polarity will damage your electronics.

Outstanding performance with very low fading. Weight still there but made up for it with great flight time. Awesome!

Better than the ones that came with your lil quad

Using these with the Eachine QX95. Check the polarity of your existing connectors. If reversed, you MUST cut the hear shrink from the connector and use a sharp knife or tiny screwdriver to release the wires/pins from the connector. Remove one, hold it against the battery and away from the connector and ensure the small metal bit that kept the connector in place has not been pressed in. If it has, use the knife to pull it back out a bit. Do this before releasing the second wire. Swap them over one at a time to avoid sparks.
Slip a similarly sized piece of heat shrink as the one you cut off over the rewired connector and tidy it up.
Cheap, powerful alternative to the stock 1S 600mah low C batteries that come with it.

Ordered 3 of these lipos and received the item from HBK after about 5 working days. First thing that caught my eyes was the interesting design of the box and it was well wrapped too:). I used this battery for my QX95(converted to 80mm frame). This things packed plenty of punch and much longer flight time compared to stock battery. Checked out my test flight of these lipos:-
https://www.youtube.com/watch?v=8MyaywVEuwQ
If you are looking for a battery upgrade or just a simple replacement, look no further, this is one of the best 1s battery that you can ever find on the market. I highly recommend this:)

P/S:- You might wants to check the polarity of the battery before you plug it in, it might differ.

They are great, pack a punsh and chargeing is around 650 mah when my v931 lands out of breath :)

they get hot as the wl pack and 720 mah upgrade i have, but flies about the same as the 720 but with more power right up til they run out.

I bought these for an Syma X5C-1. I connected one to my drone and it turns out these are a different polarity!! The connector is polarised to stop this very problem! So either the manufacturer made a mistake or these use a weird polarity? I don't get it, but just check before you connect or the rotors will fire full f$cking speed with the on/off switch in the off position and your hand will stop one of the rotors so your brand new F6cking drone will almost burn out a motor before it even fpcntCking flies. So yeah just be aware of that one guys and gals

Received one today, comparing it against NE-BA931 (Nano-tech 1S 750mAh 35-70C) in stock Syma S5C-1 quadcopter. The drone has noticeably more pep in sudden acceleration, though the runtime over three cycles tonight appears to be very similar to the nano-tech, possibly slightly shorter, in fact. These batteries appear best suited to high-discharge applications, so while this was an interesting experiment with my cheap drone with tiny brushed motors, an application involving brushless motors would really allow these Grephene series batteries to shine. I'll keep these in mind for when I move to a fast quad!

Amazing little battery! I just wish they had more so I could buy more! I love micro quadcopters and these batterys have out performed every other single battery I have tried, and I have a lipo storage bag brimmed with 1s batterys! Flying a custom made micro quad with 8.5mm motors and a fpv system is demanding on power, and all my other batterys are very warm, sometimes even hot after a flight. These batterys are nice and cool after the hardest flight I can give em. I wish they made these in the 300-500mah range! These new graphene batterys are going to be the new standard.