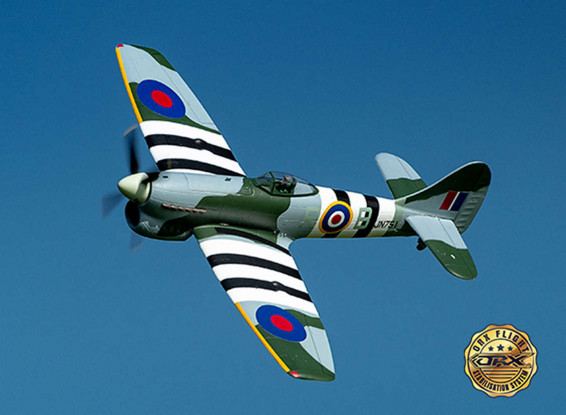 You will earn 79 bonus points for buying this item.

Product Description
This H-King version of the thoroughbred Hawker Tempest warbird is manufactured in a superbly finished EPO foam and an authentic World War ll D-Day invasion stripe color scheme plus all the decals are factory applied. The Hawker Tempest comes with motor, ESC and servos pre-installed and also a built in 6 axis ORX flight stabilization system to make it even easier to fly. The stabilization uses a 32bit MCU and a 6 axis digital gyro for ultra fast control response, it can also be switched from beginners mode to expert mode.
The H-King Hawker Tempest is based on a Mk V clipped wing version that came into service in 1944. The Tempest is a later version of the Typhoon which was found to lack performance at altitude. They fitted a new thinner laminar flow wing which gave it a marked improvement over the Typhoon even with the same Napier Sabre engine. The Tempest was at the forefront of the battle against the V1 flying bombs flying at low level. The Tempest emerged as one of the most powerful fighters of World War II and was the fastest single-engine propeller-driven aircraft of the war at low altitude. The markings of the H-King Tempest JN751 RB depicts the aircraft that was flown by Wg Cdr R.P.Beaumont OC of 150 Wing based at Newchurch in England in 1944. In this particular aircraft Beaumont scored most of his 31 V1 claims including the very first air-to-air claim on 8th June 1944.
There is little to build with the H-King Hawker Tempest, it comes 97% pre-built and as mentioned before it has the motor, ESC, servos and the ORX pre-installed. All you need to do is fit the main wing, tail assembly and plug in the main landing gear. To complete the model you require your own transmitter, receiver and flight battery, after that everything else is included.
It has the power to do all the maneuvers required for a World War II fighter and looks fantastic in the air. The stabilization system makes it very smooth and easy to fly and because of it's size it is perfect for local parks, large indoor areas or the local flying patch.
Features:
• Authentic scale detail
• Outstanding flight characteristics
• Fitted with ORX flight stabilizer with 2 different flight modes (Beginner and Expert)
• Efficient 4 blade propeller
• High torque brushless motor
• Complete high-quality hardware package
Specs:
Wing Span: 800mm (31.5”)
Length: 678mm (26.75”)
Weight: 455g
Thrust rate: 1:1
Motor: 2408-1200KV brushless
ESC: 20A brushless
Gyro: Intelligent 6-axis and 2 flight modes (beginner-expert)
Servo: 9g x 4
Propeller: 8x6 4 blade
Required:
5ch or more radio and receiver system
11.1V 800mAh 15C LiPo Battery (JST Connector)
Suitable Li-Poly charger
Note: User manual can be found under the “Files” tab above.
Product Specifications
Videos
Upload video

My second plane from this small collection

I have yet to fly her, but if it flies anything like the P51 it will be great.

This plane flies like a much bigger model, is smooth in the air, tracks perfectly, flew it last time with 13mph winds and hardly noticed it. for the price, is a great buy. the ORX is a little glitchy, but overall is a worth it.
check out my review video here
https://www.youtube.com/watch?v=jciXcIWmLJM

Such a great plane. Beautifully executed. Easy assembly. Great flyer once you tune it down. Decent manual, unfortunately lacking in specific info about activating the gyro.

Hobbyking have asked me to provide a review on this aircraft. As I already have the stabilised Mustang I thought this would add to my collection.
On the first flight after 3 minutes flying the Tempest suddenly lost thrust and started making a loud clicking noise. With the help of the stabiliser I was able to land with virtually no power on the propeller and on inspection noted that the back end of the spinner was somehow stripping around the locking nuts, so much so that it had melted. The rear wheel shaft was also bent when I received the model.
I put a claim with photos in to Hobbyking who immediately came back accusing me of not flying the plane correctly and claiming that once the plane had been flown they would carry no responsibility.
The spinner was definitely assembled incorrectly, a situation that could not be picked up unless the plane was flown.
I am disgusted with the attitude of Hobbyking and all I can say is, yes I think the Tempest would be a great little addition to anyone's collection but do not rely on Hobbyking for any form of after sales service or support. They are a disgrace and I have grave reservations about dealing with them in the future..

HK response: We empathize with you but we NEVER accused you of not flying the plane correctly. We merely stated: I'm sorry to hear about this. As a general policy common to all RC vendors, HobbyKing does not accept or warranty damaged models or parts after use or a crash.

It is impossible to determine for certain whether the damage or concern was the result of a radio system failure, electrical issue, mechanical issue or pilot/driver error. It is also impossible to determine for certain whether a part was faulty during use or as the result of being involved in a crash. Therefore we accept no responsibility or warranty claim for any damage whatsoever that occurs during or directly after the use of a radio-controlled model.

This is a great product, well made, and uses good quality materials. This combined with the stabiliser system makes for a fantastic little plane.

Purchased the hawker tempest and not disappointed.
Very well made very accurate and simple to put together just need to add more warbirds to this scale range now a stuka or a focke wulf would be nice.