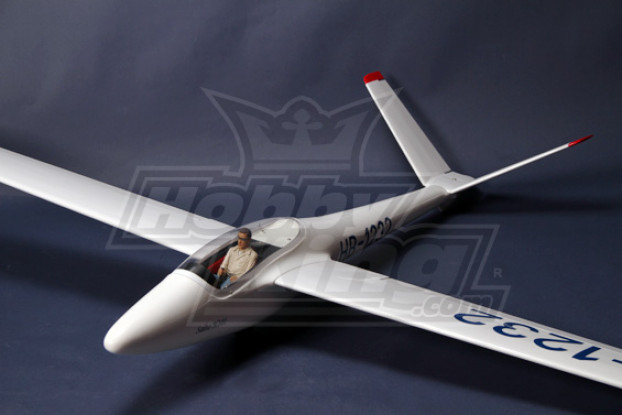 You will earn 80 bonus points for buying this item.

Product Description
Be the envy of the scale glider fraternity at your local club with the H101-Salto aerobatic glider! Salto, meaning â€œloopâ€ or more literally â€œbackward somersaultâ€ in German, will have onlookers doing back flips once they see the scale finish and attention to detail of the large pilot and cockpit. Designed and built in the 70's only a small amount of these gliders ever went into production. Now you have the chance to own a piece of glider history. Featuring sleek elegant lines and a V-Tail design, you will be able to test your skills and push the outer limits of aerobatic gliding. The glider features a fixed landing pre-installed in the fiberglass fuselage and ply/balsa built up wings with an easy sprung wing retention system that will have you performing a â€œSaltoâ€ in no time. With large working flaps this model can be flown and landed in relatively small areas, plus, the model can be setup in a traditional flap/aileron configuration or a Quadro-flap configuration for extra control and breaking effect. You will needÂ 4 slim wing servos, 2 for each wing and Two standard servos, one for each surface of the v-tail.Â You will also require a transmitter and receiver (Tx/Rx) and battery. Specifications:Wing Span: 2.45 m (96.5") Length: 1050mmWing Area: 30 dm2 (465 sq. in.) Wing Airfoil: HN 805Wing Loading: 46 g/dm2 (15 oz/sq. ft.) Flying Weight: 1.4 kg (50 oz) Required:4Â x Slim Wing Servo2Â x Standard servoRx and Tx with receiver battery
Product Specifications
Videos
Upload video

I have just finished my model & flown it over Easter weekend 2013, the model was well finished & presented well I was happy with the finished product and value for money.

The only issues in the build were working a neat way of installing the canopy I ran my own wire lume for the servos.

Flying the model proved to be a huge disappointment, I launched the model into the blue yonder trimmed it out and had it flying very nicely after about 3 minutes in level flight the wing joiner snapped with the right wing leaving the model, the resulting pile of bits not leaving a smile on my face.

I tried talking to Hobby King before posting my review; unfortunately the reply was we dont warranty crashed models.

Not much respect for someone who has built & flown hundreds of models over 37 years for myself & hobby shops.

Do not fly this model without replacing the wing joiner as it is not up to the job use solid carbon fibre or spring steel.

Thanks Hobby King for treating me like a dummy after spending thousands of dollars with you.

H guys
Mine arrived today with broken canopy.
What shall I do ? Can HK send me an other canopy?
Overall the glider is fantastic with very good quality

Build the Salto so I can have a glider to tow with my Pilatus PC6. It arrived quickly and it was packaged very well. Changed the way the wing was mounted to the fuse. (two bolts to hold the wing on) Moved the servo tray to the front of the fuse, added a tow release. Changed the incidence on the tail to more positive, permanently glued the tail on. Changed the control horns. Had to add weight to the nose to balance.
Have flown the Salto, it flies well. Very well behaved under tow, sensitive to control inputs, lands fast. It does thermal well, almost out of site twice. Used digital servos on wing, Mini on rudder-elevator, standard for tow release. Did not use the scale cockpit. Canopy is tapped on, works well.
Made lots of changes, including reinforcing the wing mount, and fuse.
Great Value for the money.
Enjoy flying it( under tow) Will try the slope next.
Happy Landings!!

Mine arrived with a broken V tail. Wing joiner is made of low quality steel (diameter 7 mm),and aside from being heavy, it bends easily and caused my plane to crash on maiden flight.
The tail incidence was out of alignment and severely twisted on the left side for 2,5 mm. Need to add balsa and do a lot of sanding work.

Received mine in good condition. At first I changed several aspects such as the with of the V-tail horizontal part. More details can be found here:

Due to these changes the all up weight will become around 1,48 kg. This includes a 7mm full carbon wing joiner.

Hi all, I purchased the Salto and had it shipped to New Zealand without problems.
The box was in excellent condition when it arrived however the RH V tail showed some small crushing which obviously had been done before packing at HK.
Build quality is OK.
The fuselage is pretty thin fibreglass but adequate. The hardware supplied was all there and mostly quite useful. Included is a tiny plywood tow hook which I would not use. In fact this model won't be seeing any bungy or winch lines as I bought it for the slope.

The model went together ok although running the aileron extension cables was trickier than first thought.
The steel rod wing joiner is long and heavy, I thought about buying a carbon tube but was unable to source the dia locally so I ended up using the supplied steel one.
The V tail pushrods are also heavy but these got used as well.

All this went into producing an AUW not too excessive but in my opinion, the WL ends up a bit too high, this model does not have a lot of wing area.
In flight the model tip stalls about the worst of any model I've flown and I would recommend at least 12 knots of breeze on the slope and preferrably around 15 to 18 kts.
Keep the wings as level as possible in turns until you get used to her and keep the speed up in those turns too and you should be all right.

Overall, good value to the US $ 98 I paid plus shipping but the wing could have

got my delivery today 4days from order everything was A ok was very good boxed ;will place some pics from my bilding the glider and video from first flyght , top for hobbyking.