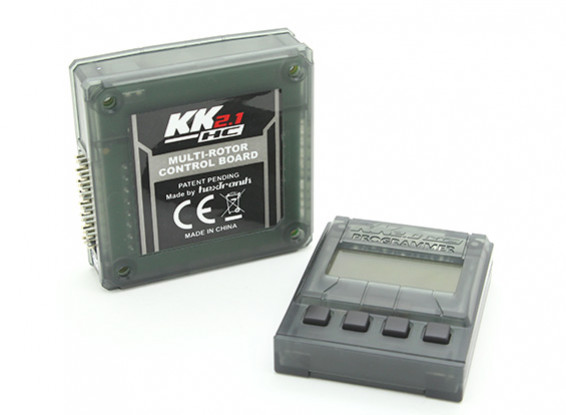 The next evolution of the rotor revolution is here!! The KK2.1HC (Hard Case) is packing new found power with updated sensors, memory, header pins, hard case and remote programmer.

The KK2.1HC is the next big evolution of the first generation KK flight control boards. The KK2.1HC was engineered from the ground up to bring multi-rotor flight to everyone, not just the experts. The remote LCD screen and built in software makes installing and setup easier than ever. The screen and programing buttons have been relocated to a remote plug-in programmer and a hard case installed, this makes the KK extremely durable. The plug in programmer uses the exact same format as the onboard version and can be plugged in at anytime for a quick value change. This new design allows the KK to be installed in frames where access to the onboard buttons and screen was an issue, you can even leave the cable plugged into the KK side and run it out for access to the programmer. The Hard case still retains the standardized 45mm mounting holes and has the buzzer is now internally mounted. Mounting locations and damage to the LCD screen is a thing of the past.

A host of multi-rotor craft types are pre-installed, simply select your craft type, check motor layout/propeller direction, calibrate your ESCs and radio and you’re ready to go! All of which is done with easy to follow on screen prompts!

The original KK gyro system has been updated to an incredibly sensitive 6050 MPU system, making this the most stable KK board ever and allowing for the addition of an auto-level function. At the heart of the KK2.1HC is an Atmel Mega644PA 8-bit AVR RISC-based microcontroller with 64k of memory. An additional polarity protected header has been added for voltage detection, so no need for on-board soldering. A handy piezo buzzer is also included for audio warning when activating and deactivating the board.

The KK2.1HC added polarity protection to the voltage sense header and on-board buzzer. The voltage sense line has been updated for better accuracy. The Hard case is clearly labeled, making installation and connections a snap.

If you’re new to multi-rotor flight or have been unsure about how to setup a KK board then the KK2.1HC was built for you. The 6 Pin USBasp AVR programming interface ensures future software updates will be quick and easy.

The Mixer Editor allows you to adjust where and how much signal the motors receive from stick input and sensors. This allows you to create any configuration possible with up to 8 motors or servos.

* Note: The programmer does NOT need to remain plugged in for the KK to operate, Simply plug in, program, unplug then fly

** Note: It is all ways recommended to update to the latest software version as part of your initial setup.(This is different than v1. 6 for KK2.0)

Great product, excellent! But you have to set it for proper operation

Well i plug her in. A simple task and right away the L.E.D. came up with Safe and Menu. After a few tries I was able to flick around the menu. Then I did something wrong and was unable to rearm my Quad. I look at You Tubes and found how to fix it all and off I went!

As know - a real great and easy to handle FC

Don't buy this do yourself a favor and buy a naze32 rev 6 from a US supplier HK sucks and if you have to return anything they'll say they never received it and then what options do you really have when dealing with a foreign country?

love the kk board greatproduct

A multirotor[1] or multicopter is a rotorcraft with more than two rotors. An advantage of multirotor aircraft is the simpler rotor mechanics required for flight control. Unlike single- and double-rotor helicopters which use complex variable pitch rotors whose pitch varies as the blade rotates for flight stability and control, multirotors often use fixed-pitch blades; control of vehicle motion is achieved by varying the relative speed of each rotor to change the thrust and torque produced by each.

Due to their ease of both construction and control, multirotor aircraft are frequently used in radio control aircraft and UAV projects[2][3][4][5][6][7] in which the names tricopter, quadcopter, hexacopter and octocopter are frequently used to refer to 3-, 4-, 6- and 8-rotor helicopters, respectively.[8]

In order to allow more power and stability at reduced weight coaxial rotors can be employed, in which each arm has two motors, running in opposite directions (one facing up and one facing down).[10] fgd

Was running Multiwii boards in my Quads and liked them but never really was satisfied with them and lost interest in flying them. Bought one of these boards and Love them. Has renewed my interest in flying Quads. Simple and fast to program and not having to plug them in to a laptop to program is fantastic for me. Carry the little programmer in your pocket and away you go. Nice stable flight right out of the box, Thank you Hobbyking

I have been in the RC hobby for many years and this is my first quad project. I used the red HK 250 frame, this controller, LD power race spec 1806 motor/esc kit (all US warehouse items). As others have done I put the unit in label up and it wouldn't calibrate the Y axis. once I turned it label down it calibrated. I got the instructions from the files tab above. (thank you who ever you are for that) The set up was very easy and straight forward. As advertised. The controller was a little big for the frame but I was able to modify the frame so it would fit between the top and bottom frame (building skill needed, If you are not a skilled builder then I would maybe suggest the KK2.1 (no hard case) do to the size. My quad flew very stable the very first flight on the default settings (not even trim needed) only thing I changed after the first flight was to change the yaw to 75pcnt from 50pcnt. now it flys perfect. NICE controller

Right out of the box this fc was defective. The z accelerator was defective so could not calibrate. Poor customer service as I have to wait 2 weeks from the day they receive the unit before they will ship a replacement. So if I just order a new one they will not ship for free. That's why I will order a new fc from US supplier.