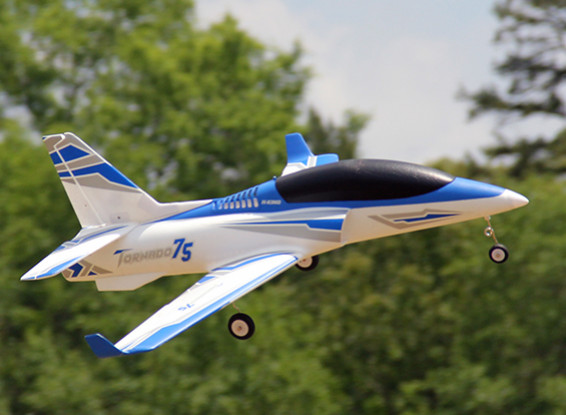 You will earn 107 bonus points for buying this item.

The Tornado 75 takes plug and fly EDF’s to a whole new level, creating a robust airframe that suits all levels of pilot. The Tornado 75 literally flies like it is on rails, wherever you point it, it will go. Couple this with a wide flight envelope, this model will suit a first time EDF pilot, yet at the same time keep a smile on the face of the most experienced turbine pilot.

The design is simple and fast to assemble. No glue! The moulded EPO airframe ingeniously clips and screws together, and with plugin wings will have you up and flying within a matter of minutes. The Tornado 75 features a large clip in canopy offering easy access to your radio gear and battery. Although the Tornado is supplied with fixed landing gear, optimal performance is obtained by hand launching, as the model can be gracefully belly landed on any grass runway.

Coupled with the 60A ESC, the 3060 – 2000KV motor and fan unit makes light work of throttling this performance model through the air. Inverted, knife-edge, split S, snaps and rolls, the Tornado 75 works easily through these precision aerobatic manoeuvres.

The Tornado is so addictive, you’ll want to fly it all day long.

The most for the money

Suprising... Very well finished trimmed and ridiculously easy to put together. 6 Cell turnigy 30-40 c 662gram battery goes vertical. This battery gives a consistant 6.5 minute run. Landing is a bit fast and would be better with flaps. I like solid landing gear because my field is paved but with big expansion joints. Landing gear on any aircraft is always a top priority. Worst case I can put larger diameter tires on it to smooth out the cracks.

I took this model to the field this morning for its maiden flight, It flew perfect just some minor trim to correct. Plenty of power for a grass field take off and vertical power for days! Now for the negatives, the servos are absolute crap and an elevator servo failed during the second flight causing a complete wright off, battery included!! Also the CG needs to be set approximately 10mm back from the recommended 85mm

A very well balanced airplane with a 6S 2700 mAh 35C. Sturdy, easy to fly and land. Really need to push it, to before it shows any bad behavior.
I just wish it had options for retracts and flaps.

Excellent value, strong, easy to fly, land and play with aerobatic. Color pattern much better than its original equivalent. 6S nano tech 3300 can last for 4 minutes per flight at around 75pcnt throttle average.

The plane is nice looking but the hard were is real crap. 1. After quick assembly I launch the plane and after 5 min batterie died 6s 2650 mAh, lucky I manage to land safe. 2. In second flight ESC burned down. 3. Third flight, the right elevator servo stacked in neutral position.

I have found the solution. Increased lift by adding balsa 20mm at the trailing edge and that is thinner, lighter batteries 5s in 2200 and I cut the wingtip winglets that made it unstable. Now he is 200g less, better lift and flies very well with a centering 95mm and not 85mm. Originally, it is very tricky to fly, you need a good level to ask without crash, now he is agile, easy theft and fraud arises smoothly as if it had flaps.

Awesome jet. Goes together in 10 minutes. I did remove the fan and wrap 2 layers of gorilla tap around the housing and reinstall for improved strength. Dropped in a 6S 3300, balances perfect and fly's awesome.

Hard to believe such a nice flyer for such a cheap price. Take-off grass is no issue at all. Very stable in the air and on landings.

Awesome jet. I have 3 jets from Motion RC, but this my favorite so far. All linkages are already done. Mine were perfectly centered unlike other models. Just Screw wings to fuselage. It flew 7 mins and came out with 3.75v/cell. 100mph at times. Fast an precise. Didn't have to trim it. It holds knive edge, inverted loops, snaps. Can't beat the price.

Mine fusage explode because of exploding fan.
After second flight.

So need new fusage, only HK thit remove the item from international and EU warehouse.........???

So i dont get waranty on a exploding plane, and cant by the new fusage, not happy at all.