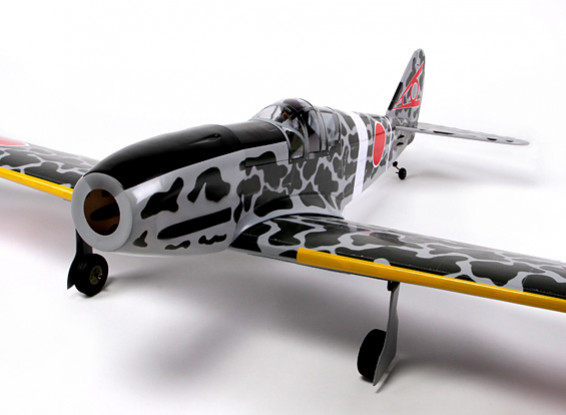 You will earn 86 bonus points for buying this item.

The Kawasaki Ki-61 was a Japanese World War II fighter used by the Imperial Japanese Army Air Force. The first reports of encounters claimed the Ki-61s were Messerschmitt Bf 109s, further reports claimed that the new aircraft was an Italian design, this led to the Allied reporting name of "Tony" assigned by the United States War department, the Japanese Army designation was "Army Type 3 Fighter". It was the only mass produced Japanese fighter of the war to use a liquid cooled inline V engine. Over 3,000 Ki-61s were produced and the initial prototypes saw action over Yokohama during the Halsey-Doolittle raid on 18th April 1942 and they continued to fly combat missions throughout the war.

This model of the Kawasaki Ki-61 Tony captures the graceful lines and mean look of the full size airplane and the weathered, detailed finish will turn heads where ever you fly. The model has been designed around a .40~46 size 2 stroke or .61~70 4 stroke engines though equally at home with an equivalent size electric motor. It is supplied with fixed landing gear but it is easily converted to retracts, the wheel wells are already installed.

The model is of balsa and lite-ply construction and is fully covered in a scale weathered camoflaged finish. Also supplied is a fiberglass cowling, landing gear doors, machine gun detail and hand painted pilot.

beautiful plane, watch out with the covering it is pierced before you know.
and when aren't aware you will be shortly...and then you got a big scar.
just some trouble with the exhaust to fit and the steering gear for the the tail steering wheel ..it is big it's got great looks better than the pics from hk...sure recommend this one.
but don't follow hk's advice about the retracts cos i bought those for 70,- euro and where way to small...the artist in me ruined it before hk could react.

I have had 3 flight days with this plane and it flies very well, the build is straight forward with all the parts fitting well, I am running an electric motor, make sure you have down thrust when you do the motor install, there is side thrust built into the bulkhead, the C of G in the manual is good, I have not moved it, the covering can be painted if you need to, I used cheap spray paint from a can to do a little more detailing, no prep is needed, I have uploaded a pic, I would commend this plane, it flies well and looks sharp