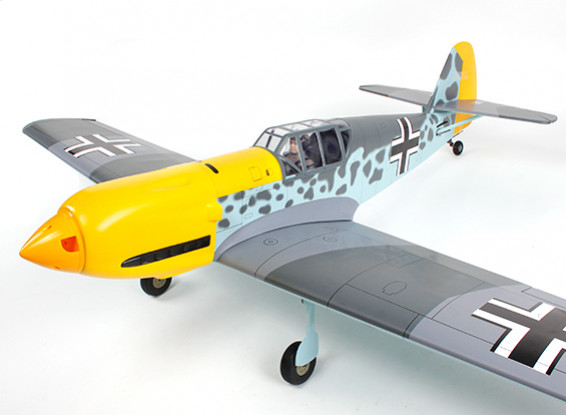 You will earn 158 bonus points for buying this item.

The Messerschmitt BF-109E was the workhorse of the German Luftwaffe especially during the Battle of Britain when aces like Adolf Galland flew them with deadly effect against the RAF over southern England.

This classic version of the deadly 109 comes in the famous yellow nose colour scheme which was used on many “E” models flown by the Luftwaffe against the RAF in 1940. The quality covering includes scale markings and even panel lines which only adds to the overall scale and menacing appearance of this fantastic model.  You can be sure that it will look every bit the classic WW2 fighter during those mandatory low strafing runs.

The model includes the airframe, spinner and wheels, allowing you to install your own choice of radio equipment, servos, undercarriage and motor. The undercarriage placement provides for a wider track which will aid take off and ground handling.  The model can be flown either with a glow engine or with an electric motor equivalent.

Very niice looking bird. Came nicely packed. It is a model from VQ-models of vietnam. So I guess it flies very well as my other vq models do. Will come back with maiden info?, but not before next year because it is a winter project.The kit is quiet complete and everything has a very good look and feel.

received in very good condition, very nice plane as it also very rare in my place.

Kit went together well. I left the undercarriage fixed as I fly off a grass strip and small retracts don't perform well. Recommended COG ok. As using a .46 ASP glow engine I covered all the air vents under the cowl, presumably for cooling the electrics if using an electric motor. Also I permanently fixed the removable battery hatch down to increase the fuselage strength. Flies well and needed little trimming but watch the take off as it will yaw to the left. Be ready with the rudder and don't pull up too quickly.