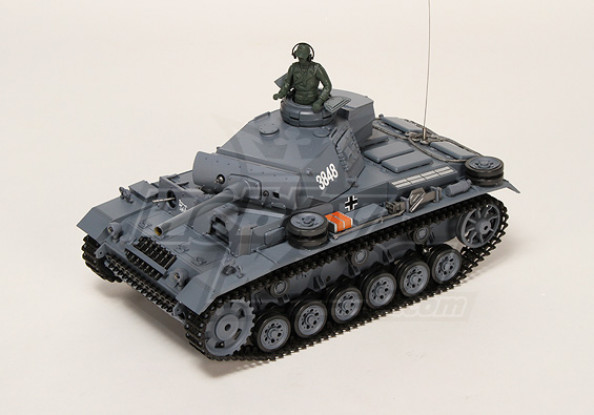 You will earn 51 bonus points for buying this item.

The tank's turret rotates 360 degrees, and the barrel can move 60 degrees. The tracks run on spring wheels just like the real tank to enable the Panzer Kampfwagen III to clear obstacles easily.

There are many sound and feature adjustments and the radio can control all functions without the need for multiple buttons. This helps the user to quickly control the tank in battle situations.

Included with the Panzer Kampfwagen III is a 7.2v NiCd pack, charger, radio system and all accessories. You only need 8 AA batteries to be battle ready!

Note: This Model does not include a smoke generator

Received intact and undamaged,ordered 26/8,shipped 2/9 -10 days delivery time.Packing appears to be original box with art ,turned inside out-would not be useable for a gift.Battery charger is 110v only(you could use a shaver power socket). A disappointment was the lack of sound feature as described/expected -description states "There are many sound and feature adjustments and the radio can control all functions without the need for multiple buttons. This helps the user to quickly control the tank in battle situations" and end of description "Note: This Model does not include a smoke generator" so no smoke was expected ,but sound was expected.Also the control Tx was not working left or right turns in reverse until dismantled and adjustments made to gimbal contacts,a 5 minute job and all OK now.One more small niggle- the commander figure is from the Tiger 1 and is too tall and wrongly posed. A few minutes with a hacksaw can cure this!Overall a very nicely detailed and finished model with a very powerful BB gun.

Absolutely awesome, arrived to New Zealand well packaged and in perfect condition. The tank goes great and is really easy to use, the charger is only for 110v so its no use to me (I would use my good charger anyway) The gun is really powerful and the turning and forward and reverse functions work well. Well done HK this is a top class product and if I could give it more stars I would.

Received this tank today, lots of parts are broken. Description says there is sound effects and smoke generator.Mine does not have any on board sound nor speaker.

As far as smoke generator is concerned. I guess that you will only see it the very moment before the motors stop working for goods....

I GOT MY TANK. THERE IS A LITTLE PROBLEM W/ THE TRANSMITTER .I OPEN AND GOT FIXED IT.AND NOW LEFT BACKWARD IS WORKING SMOOTHLY.

Very cheap price. Good sound. Shoot distanse 15m.
You need replace battery for more strong. Carefuly open top door . I braike this. Barrel can move about 25 degrees only . You can not change diration up or down barrel. He cyclice move up -down -up ... when push stick.

Got my tank today, love the finish and the look of the tank, however, a rear plastic pice had broken off the tank inside of the box, also I didnt get the outer cardboard box art.

I was expecting this to be much less quality than what they are.
I plan on buying another of their tanks in the future.