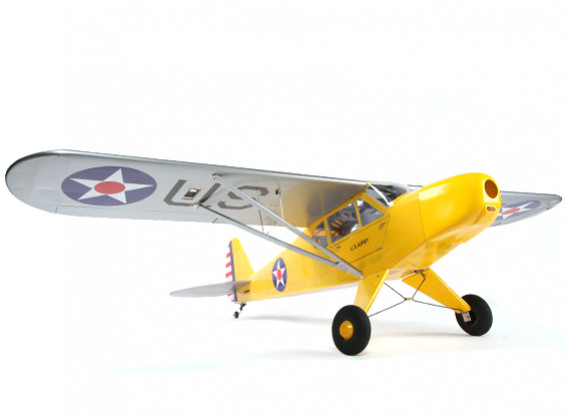 You will earn 135 bonus points for buying this item.

The Piper J-3 Cub is one of the most recognized light airplanes in the world. It was built in large numbers and was a favorite due to its simplicity, ruggedness, affordability, and easy handling. The large wing enabled it to fly slow. It has worn both civilian and military clothing in its long history including acting as a trainer and spotter aircraft during WWII.

Our J-3 Cub is an almost ready to fly model that can accept both electric and glow power options. The all wood balsa airframe comes pre-built, and covered in bright yellow and silver covering of the USA Army training regiment. A complete hardware package including wheels, struts, and fiberglass cowl completes this model. Though it has a large wing, it is a two piece plug-in type which makes transportation a breeze.

This is a VQ model Piper J-3 Cub and its an excellent plane! It's a clipped wing version, and it needs a bit of speed on take-offs and landings, if you stall it, it drops a wing.
It looks and feels very well built, the covering seems quite resilient, it took me a few afternoons to complete with no surprises. The manual contains pictures with the steps of how to install everything. It even includes extra pieces of covering film in case you need to repair a tear which is quite welcome.
I have fitted it with an ASP FS52AR engine with 11x7 propeller, HXT 5010 servos, a Turnigy 8A UBEC and a 1300 3s zippy battery that sits in the back seat. With this setup the plane balances perfectly and the CG is spot on.

It is a very nice looking airplane. With aileron/rudder mix, it flies very well.
https://www.youtube.com/watch?v=36RJcDyogKc