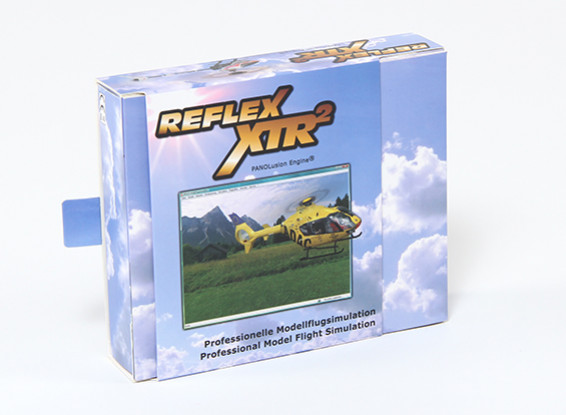 You will earn 89 bonus points for buying this item.

The new Reflex XTR2 is the result of many years of development in close co-operation with the R/C hobby community. It has resulted in a class-leading, sophisticated simulator that is suited to beginners and advanced pilots alike. In addition, highly sophisticated, FREE model and scenery design tools are available online to further extend the advanced capabilities of Reflex XTR2.

The new stereoscopic 3D mode produces truly impressive spatial depth perception and has been programmed in both sceneries and models. The stereoscopic 3D is so realistic in flight that you will move back if you accidentally fly your model back into you!

The simulator can operate in either one of 2 Stereoscopic 3D modes: either using red/cyan anaglyph glasses (included with the simulator), or using 3D shutter glasses. Note that 3D shutter glasses require the use of a 120Hz 3D display and NVIDIA-compatible graphics card.

Heli pilots, we've found, are particularly favoured by the most realist physics, rotor, and smoke we've ever experienced in a sim and also by the introduction of stereoscopic 3D technology as close-in hovering work, 3D flips, autorotations, etc benefit from the new ability to see real spatial depth in your model and field. If you get too close, your tail-boom will actually appear to poke out of the screen - which can be quite alarming when you're close-in hovering!

Of course, the simulator runs in normal mode too. If you want the ultimate in flight training and realism, give the Reflex XTR2 a try.