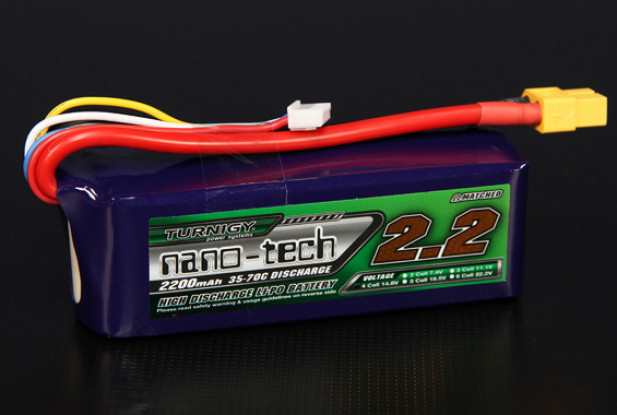 More than just a fancy name. TURNIGY nano-tech Lipoly batteries were designed from the ground up with serious performance in mind. Utilising an advanced LiCo nano-technology substrate that allows electrons to pass more freely from anode to cathode with less internal impedance. In short; less voltage sag and a higher discharge rate than a similar density lithium polymer (non nano-tech) batteries.

Purchased three batteries which arrived promptly. Batteries were all charged to 20pcnt for shipping. Batteries all charged up and run ok, but as of yet cant comment on capacity.

The carefully chosen range of HobbyKing Lipo Btteries is an absolute must for the keen Hobby Flyer, Rc Car racer, Boat driving & Quad racing.. Highly recommend this nano-Tech range of batteries for reliability and ease of charging using a HobbyKIng LiPo charger ... when correctly stored whilst not in use these batteries will last many seasons .. I always choose from the HobbyKing range of batteries be they the fantastic BOLT LiHV to the new Graphine range HobbyKIng sell only superior batteries at the most competitive prices, I have searched many other outlets and always return to HobbyKIng for the best deals !

Nice Lipo for the price, but not as durable as other brands. Puffs after about 100 cycles (3D fligh with airplane).

300 flights each. fast charged at 4c every time. fly to 3.8v.
No sign of sag or even the slightest bit of puffing, they still look and fly like new
Extreme flight 48' extra 300 exp

i now have 8 of these, they preform very well. no issues

Nano-tech lipos are alot of power for the money!

Have two of these that I run in my PC-9 (with 3648 650kv motor). I've cycled about 5 times and they perform well. They do get slightly warm, but have good punch throughout the flight. I have experienced a little puffing with these and other nano-techs, but has not affected the performance of the batteries yet.

This is a very good battery , I have used this type for my T45 Goshawk 64mm fan many times.